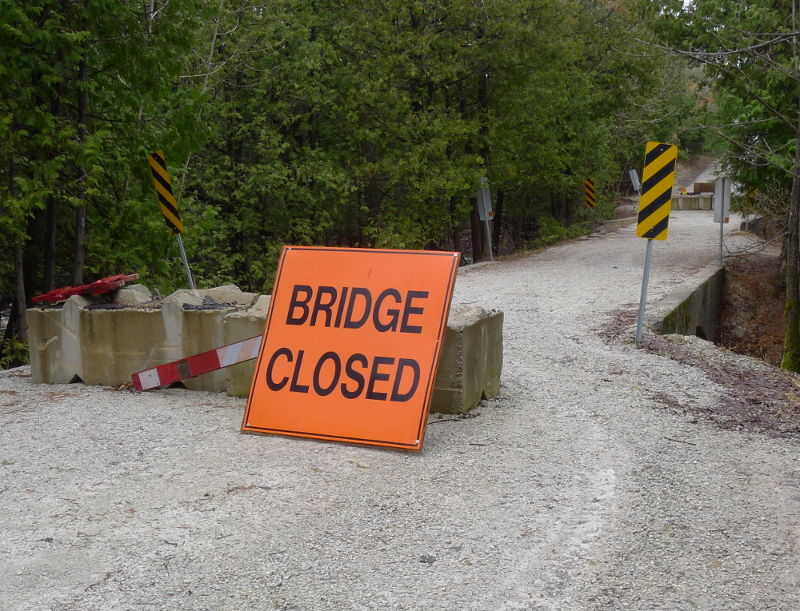 A pair of bridges on the Holland- Sydenham Town Line between Grey Road 29 and the 2nd Concession South have been closed for more than five years, and despite a concerted effort by the current council to find a solution to replace and reopen the bridges, progress has been slow. However, a recently completed legal review is offering some hope that a solution could soon be found.

“Staff retained Barriston Law to complete a review of Structure 21 and 22 with regard to jurisdiction based on County of Grey By-laws. The review of the structures identified that Structure 22 meets the requirements identified in County of Grey By-law No. 1102 based on its span, and therefore all repair and replacement work is the responsibility of the County. The information was provided to the County and they have completed on-site measurements to verify the information,” staff advised Council in a report presented at their June 14 meeting. “As the County has full ownership of one bridge, it was determined that a decision was needed from County Council to determine the direction for the two structures. Depending on the County’s decision it is recommended that Meaford and Chatsworth would follow suit to provide continuity along this road section.”

In January of 2016, the Municipality of Meaford implemented the emergency closure of the bridges on the Holland-Sydenham Townline, due to the results of the Ontario Structural Inspection Manual (OSIM) and recommendations from Ainley and Associates Structural Engineers, which prepared Meaford’s State of the Infrastructure (SOTI) report for bridges in 2015.

A municipal class environmental assessment undertaken in September 2016 determined that the preferred solution was to remove the bridges permanently, a recommendation that frustrated area residents and farmers who rely on the bridges, and in the five years they have been closed have had to detour several kilometres around the closed bridges.

Estimates for replacing the bridge structures were provided in 2016, and ranged from roughly $750,000 for a single lane corrugated steel plate culvert structure, to as much as $2.4 million for a concrete structure, however staff and Council have continued to explore alternatives that could be less costly.

Over time came the realization that being on a boundary road, the bridges were not solely the responsibility of the Municipality of Meaford but also the Township of Chatsworth, and Council directed staff to develop a boundary road agreement with Chatsworth.

The Municipality entered into a boundary road agreement with the Township of Chatsworth in February of last year, and that agreement defines the process for agreeing to capital projects and the dispute resolution process.

Chatsworth’s unwillingness to engage in a new environmental assessment and ultimately share in the cost of replacing the bridges has put Meaford’s Council between a rock and a hard place, and staff has previously advised that Meaford’s options are limited.

The legal review report and analysis presented to Council on June 14 however suggests that at least half of the responsibility lies with Grey County.

“The review identified that Structure 21 is 16.73 feet and therefore remains the joint responsibility of Meaford and the Township of Chatsworth. However, Structure 22 is 20.66 feet and therefore falls under the responsibility of the County of Grey to maintain and replace,” staff advised Council in their report. “The information from Barriston Law was provided to the County for review. County staff completed verification measurements of the bridge structures and confirmed that Structure 22 exceeds the 20 foot requirement identified in By-law No. 1102. A meeting was held with the County and Chatsworth to discuss the work completed to date, including the Class Environmental Assessment (EA), and the next steps in the process.”

“Depending on the County’s decision it is recommended that Meaford and Chatsworth would follow suit to provide continuity along this road section,” staff advised.

Should Grey County approve replacement of bridge structure 22, Meaford and Chatsworth will be responsible for the costs associated with Structure 21. Based on the existing Boundary Road Agreement, the costs for capital works are split 50/50 between the two parties.

Grey County staff are currently in the process of preparing a report to County Council. Once a decision is made at the County level a final report will be brought forward to Meaford and Chatsworth councils to approve the required work on Structure 21 based on the County decision.