30 Years of Research Results in Book About John Muir 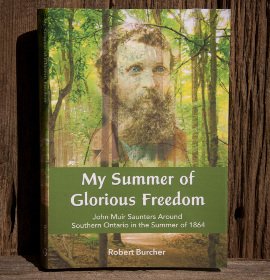 One day in the early 1990s, Blue Mountain resident Robert Burcher climbed over a fence into a Grey Sauble Conservation Area and found an abandoned historical plaque that changed the course of his life for the next thirty years.

The plaque spoke about John Muir, a “famous naturalist whose books and articles payed a significant role in the development of the United State National Park Service”, of his “walking tour of Canada West”, which is the present day province of Ontario, and of his “employment in the factory of William Trout and Charles Jay near Meaford.”

The John Muir saga, as Burcher refers to it, has preoccupied him since that fateful day. The discovery of the abandoned historical plaque set off a series of events and a quest that this year will culminate in the launch of his book, My Summer of Glorious Freedom, on April 21, on John Muir’s birthday.

“I have thought often about the motivations that led me on this quest,” Burcher said. “They have changed over the years and morphed into different emotional directions. At first seeing the plaque, it was a sense of curiosity. Why a plaque where no one could see it? Then a sense of disbelief that the famous John Muir lived locally at one time.

“What was important at this point is that I had known about him since my teenage years in the 1970s, when I was given photo books produced by the Sierra Club. Those books informed my visual sense of what photos could be and also how important the environment was. After the sense of disbelief of his local time, I had to find out for myself if this was in fact the same John Muir and why was he here.”

On finding the plaque, Burcher contacted the Ontario Archaeological and Historic Sites Board and in time the Grey Sauble Conservation Authority, who then passed on his name to a local historian, Scott Cameron, a contact that led Robert to join forces with the Canadian Friends of John Muir (CFJM), and University of Alberta student Connie Bresnahan, who was doing her PhD on Muir’s time in Canada. My Summer of Glorious Freedom includes a detailed account of the work of the CFJM and Connie Bresnahan’s contribution to locating the site of the cabin where John Muir lived between 1864 and 1866, while employed at the Trout sawmill in Trout Hollow on the Bighead River south of the Meaford townsite.

“During my time with the CFJM, I was interested in the process of research and education and also the archaeology,” Burcher said. “Those five years were a training ground for all of the other historic and archaeology work that continues to consume me.”

In time the CFJM disbanded but one unanswered question lingered in his mind: How did John Muir get to Meaford? “That was something I pondered for 16 years after the official end to the CFJM.

“Till… in 2015, I was called by a museum in Bruce County to see if I was interested in doing a lecture about Muir in 2016, during the 100th anniversary of the American National Park Service. I agreed to do the talk since I was, as I like to say, ‘the last man standing’ of the CFJM. Old age had taken its toll on the senior members of the group.

“To brush up on my Muir history I looked to see if there were any new books or information in the world of Muir. I was not aware that seven years earlier two books about Muir had been published – Bonnie Gisel’s Nature’s Beloved Son and a comprehensive biography of Muir by Donald Worster, A Passion for Nature–The Life of John Muir.

“The Gisel book displayed specimens that indicated where John was in the lost summer of 1864. The Worster book listed the townships that he had travelled in during his time in Canada.”

Except for one niggling, contentious detail: How did Muir get to Meaford?

“With the publication of [Gisel’s] book of botanical specimens, the ‘cold case’ cracked wide open and I knew I had the answer,” Burcher said. “ Knowing that most of the people in the CFJM had aged (or died), I was the last man standing to finish the job. I guess the final motivation is that I truly wanted to honour their work in the 1990s – perhaps a bucket-list kind of ticking off the boxes of time well spent in my life.”

My Summer of Glorious Freedom defies labelling as one or another genre. It is historical non-fiction, a detailed study of the cultural, political, and geographical factors that would have come into play as John Muir worked his way as a young man out of his home country in the midst of the Civil War into Canada West, in days long before automobiles, with no money, a passion for but limited academic training in botany, and ancestral ties and religious affiliation to Scottish Disciples of Christ throughout Canada West.

Its charm lies with its autobiographical tone that conveys just how deeply the author felt John Muir’s presence as he, the author, scoped out the lay of the land from Bradford west and southwest toward Dundas, east to Niagara Falls and north toward Meaford; as he learned to slow his pace, “to go slow, saunter and be present.” He writes of his near drowning in a pond while searching for the wild calla that John Muir had referenced and of a somewhat mystical experience when he found a honey locust specimen, on September 5, 2017, the very day and likely in the very same area where Muir had found them.

“It has been suggested that this is not a simple history book but more of an autobiographical account of the discovery of a wonderful local story,” Burcher said. “Perhaps it is a historicopoliticoanthroenvirowhodunit?”

My Summer of Glorious Freedom is also a testimony to Burcher’s skills as a photographer. The book includes photographs of historical landmarks and present day scenes throughout southern Ontario, more than 30 flower and plant specimens, and numerous maps both historical and current.

The COVID-19 situation has impacted Burcher’s plans to distribute and market My Summer of Glorious Freedom. He has a soft launch planned for John Muir’s birthday, April 21, and will let his plans evolve from there.