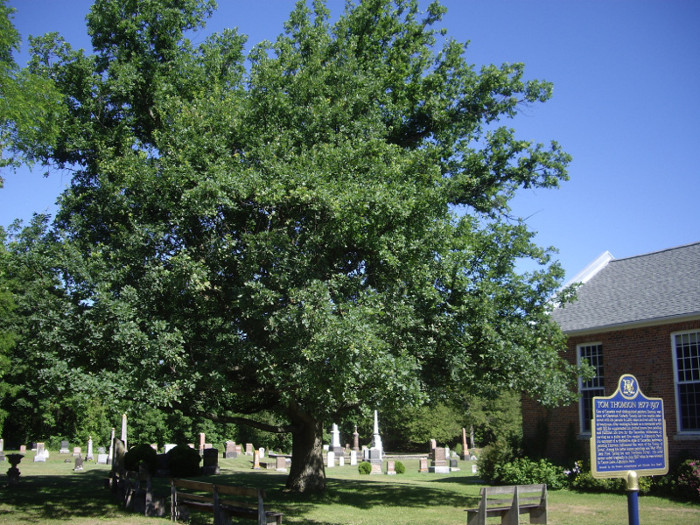 Undoubtedly, the century-old English white oak tree on the site of the historic Leith Church is just as Pete Russell, Meaford Tree Trust Chair, describes it, a “huge presence” both in size and its placement alongside one of Ontario’s historic heritage churches and gravesite of one of Canada’s most noted artists.

The Leith English white oak tree stands 59 feet tall. Its canopy is more than 50 feet wide and casts long shadows in midday over Tom Thomson’s gravesite. Its trunk measures upwards of 10 feet in circumference. This grand white oak will undergo professional arboreal care on September 22 to extend its life as one of Ontario’s carbon sequestering giants.

Meaford Tree Trust Coordinator Pete Russell approached the Friends of Leith Church (FLC) in late spring with a recommendation to extend the life of the tree through professional arboreal care. The tree has long been revered for its beauty and its ties to the historic church, according to FLC spokesperson Peter Telfer. “It’s a lovely-looking tree,” he said. “It seems to have a famed history of its own. Many wedding receptions and luncheons have been held under the old oak tree. However, as Pete has pointed out to us, without care it won’t go on forever.”

Friends of Leith Church have committed to cover the cost of having the tree professionally cared for.

The trio : Church, tree, artist and their historical significance

The church: Leith Church was built in 1865. It fell under the care of a board of trustees when the church closed in 1969. Beginning in 1972, the Grey County Historical Society assumed responsibility for an annual church anniversary service. In 1992, the church was officially designated an Ontario historical heritage church and entrusted to the care of a group known today as the Friends of Leith Church.

The tree: The ‘old oak of Leith’ was planted in 1905 by the church’s children’s bible study group. In 2017, it was recognized by Forests Ontario as an Ontario Heritage Tree, the first tree in Grey Bruce to receive this recognition.

The artist: While the ‘old oak of Leith’ was a mere sapling setting down roots in the very spot that was to become his final resting place, Tom Thomson was laying down roots as a commercial artist. He was studying design and forming friendships with Canada’s emerging young artists. Tom Thomson died tragically in 1917 at Canoe Lake in Algonquin Park.

The old oak of Leith’s significance in our everyday lives is no less than it is in the heritage of Grey County and the Leith community. In Part II of Cemetery tour in search of carbon sequestering giants (The Meaford Independent, April 21, 2022), Charles Killin wrote: The ‘old oak of Leith’ is but one of several grand old legacy trees in our municipality (Meaford) that are true heavyweights in the global fight for carbon reduction. One large, healthy mature tree has the carbon storage capability of an estimated 269 saplings.”

An assessment of the old oak by Tobias Effinger, professional arborist and principal of Arboreal Tree Care, concluded that “without the limiting proximity of trees around it, as in a forest setting, this tree had no competition for space, sunlight, or nutrients. That meant it could grow outward as easily as it could grow upward. Being almost as wide as it is tall, it acts like a sail to capture wind which puts additional stress on its large horizontal limbs.”

Effinger has recommended a reduction of limbs that are outgrowing their holding potential, the removal of deadwood and stubs, and correction of limbs with torn out portions.

Everyone is welcome to experience the arboreal care process on September 22, beginning at 10 a.m.