After Months of Pandemic Restrictions & Closures, Roadwork a Crushing Blow to Local Restaurant

Tilly’s by the Bay Café and Bakery has survived three lockdowns during the COVID-19 pandemic but the owners now fear they will not be able to survive the local construction on Sykes Street in Meaford that has blocked vehicle access to their business.

Todd and Tara Tilson located their business at 168 Sykes Street North three years ago. Business was good till COVID-19 hit. They switched to take-out only during the lockdowns.

“It was hard to do take-out from a restaurant but business was okay,” Todd Tilson told The Meaford Independent on August 5. “When things reopened, business was very good, till they closed the road. In the beginning one lane was open. People could see that we were here, even out-of-towners. I have talked to different members of town council. No one one wants to do anything. I am almost at the point now where I will have to shut down.”

Construction began in June to replace deteriorated infrastructure between Collingwood and Lombard Streets. The project will replace old storm sewers, water mains, sanitary sewers, and and will replace the road surface, a sidewalk, gutters, and curbs.

“In the beginning I thought one lane would be left open at all times. I was told that the road can’t handle the weight bearing of vehicles coming through,” Tilson explained.

During the design stage of the project, the municipality did look at either keeping two lanes open or having full road closure, according to Tori Perejmybida, the municipality’s Director of Infrastructure Services. “ Keeping the lanes open would have increased both the time taken for construction and the price. When we tendered the project, council approved full road closure based on pricing and information received.

“The contractor was able to leave one lane open during the beginning of the project. It was identified to property owners that, first of all, there was going to be full road closure but that the contractor was making it possible to keep one lane open to reduce the impact of the construction. We are now at the point where the project requires full road closure,” explained Perejmybida.

Construction is expected to continue into October. “That’s my whole busy season gone,” Tilson said. “So, work with me. Keep one lane open during my hours, then close it.”

“It’s unfortunate that business hours overlap with construction hours,” Perejmybida said. “The reason for the full road closure is safety – the safety of both workers and residents within the municipality. The closure is required so construction can proceed without anything negative happening.”

Tilson understands the importance of the construction project. “I get it, the work has to be done,” he said. “But, if they leave the road closed till October, I’m done.” 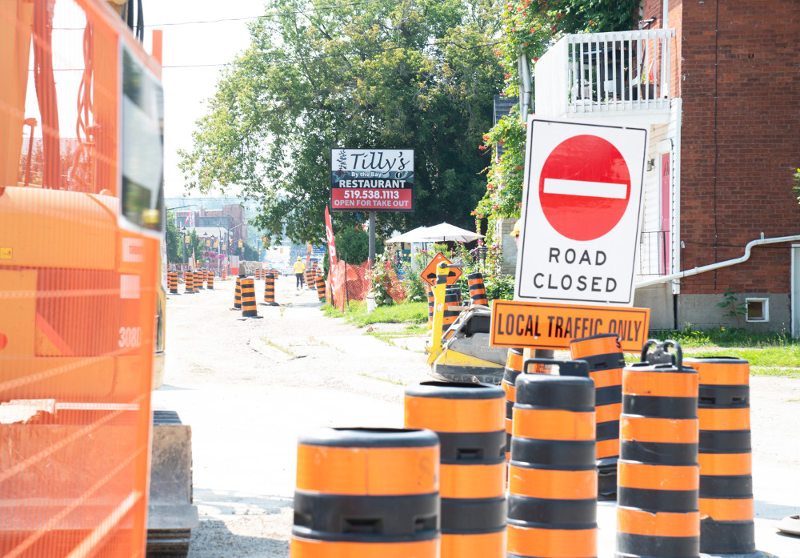