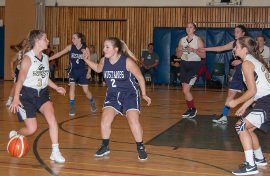 The Georgian Bay Community School (GBCS) senior girls basketball team had a lot riding on its October 24 game against St. Mary’s High School (Owen Sound). The ‘A’ team’s 34-25 win moved it to first place position in the Bluewater Athletic Association senior girls’ basketball north division that includes two other ‘A’ teams from schools of similar size, and one ‘AAA’ and two ‘AA’ schools of larger sizes.

“It is always difficult for a small school to compete with larger schools as we have much fewer kids to draw from when choosing a team,” she said. “It is really amazing when we compete with these huge schools and win.”

“Hosting CWOSSA is a huge deal,” Teed-Acres said. “It has been a very long time since we have had a team that has advanced to play in it.”

Teed-Acres attributes the girls’ success to team spirit on and off the court.

“The girls have been together since Grade 7,” she said. “They know each other, are committed to each other, never miss a practice, never miss a game. They are remarkable young women. They are leaders in their classes, school, and community, and they are strong on the court. They’re fun to watch. Our school is so proud of them.”

Photo: Georgian Bay Community School (GBCS) senior girls’ basketball team moved to a first-place position in the Bluewater Athletic Association senior girls’ basketball north division on Thursday, October 24, by defeating St. Mary’s High School 34-25. The senior girls will compete in the Central Western Ontario Secondary School Association (CWOSSA) qualifier on November 4 for a spot in the CWOSSA finals on November 15-16. GBCS will host both the qualifiers and the finals.