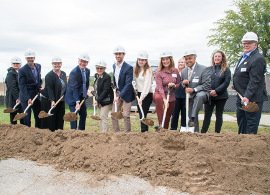 The excitement of Mayor Barb Clumpus’ words rang loud and clear during the groundbreaking ceremony at St Vincent Euphrasia School on Friday, September 27, and served to put the event back on track following an-hour delay that was never explained to the waiting audience and despite protesters outside the school chanting “No Cuts to Education.”

“I am so excited,” Clumpus said to Ontario’s Conservative government’s Minister of Education Stephen Lecce, local dignitaries, trustees, board staff, contractors, the media, and other supporters. “Today, we celebrate adding another reason for people to say, we love it here. Meaford truly is the place to be on southern Georgian Bay.”

The new school project has been three year’s in the making beginning with a Meaford area student accommodation review in 2016, followed by a proposal for a new replacement by board staff, and ministry approval under the Ontario Liberal government.

In December 2018, the Bluewater District School Board held a public meeting to present preliminary plans for a $24.1 million school to be built on the site that included the existing St. Vincent Euphrasia School. The existing school will be demolished and the new school is expected to accommodate more than 1,000 students from Junior Kindergarten to Grade 12. The cost of the new school is now set at $29.4 million.

Minister Lecce praised the school district staff and board, municipal officials, and MPP Bill Walker (Bruce-Grey-Owen Sound) for their perseverance in pursuing a “modern learning environment right here in Meaford that will prepare [students] for the challenges and opportunities on the horizon.” 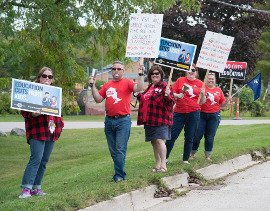 Meanwhile, protesters representing Elementary Teachers Federation of Ontario and Ontario Secondary School Teachers Federation outside St. Vincent Euphrasia School questioned the timing of the ground breaking ceremony. “It’s interesting that this is happening today when teachers are in Owen Sound for professional development sessions and the school is empty of students,” one protesters said. “Why visit an empty school? Come and see our crowded classrooms.”

In response to a doubling in COVID-19 cases over the past two weeks, the real and looming threat of the collapse of the province's...
Read more
Community News

The East Grey Hunters and Anglers Association has donated funds to Branch No. 32 of the Royal Canadian Legion to help with the many...
Read more