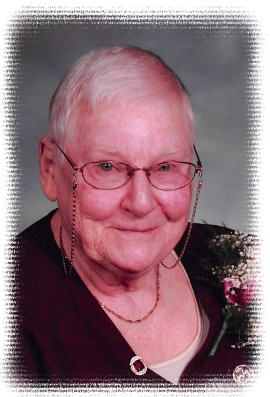 She was predeceased by her husband Bill in 1999. Evelyn will be greatly missed by her children Karen (Gary) Emonts of Chatsworth, Brad (Colleen) Watson of Meaford, and Jo-anne (Russ) McCausland of Meaford. She sadly was predeceased by daughter Alieta Liane in 1964. Evelyn is survived by her younger brother Vernon (Bonnie) McVittie of Alberta and her sister Doreen (John) Woodhouse in Chatsworth. She was predeceased by sister-in-law Grace McCoag and is survived by sister-in-law Verna Belmore of Wiarton. Evelyn was a caring grandmother to Paige Emonts, Morgan (Loretta) Emonts, Tyler Emonts, Rachel Watson, and Andrea (Pascal) Watson. Great-grandmother to River, Mason, Gavin, Julian, and Aliya. She will be missed also by her many nieces and nephews. There will be no visitation as per her wishes.

A private service will be held at the Ferguson Funeral Home in Meaford. As your expression of sympathy, donations to the Heart & Stroke Foundation or the Diabetes Association would be appreciated and may be made through the Ferguson Funeral Home, 48 Boucher St E., Meaford, ON, N4L 1B9, to whom arrangements have been entrusted. www.fergusonfuneralhomes.ca