Uncovering of Old Sign Brings Back Memories of the Meaford Creamery 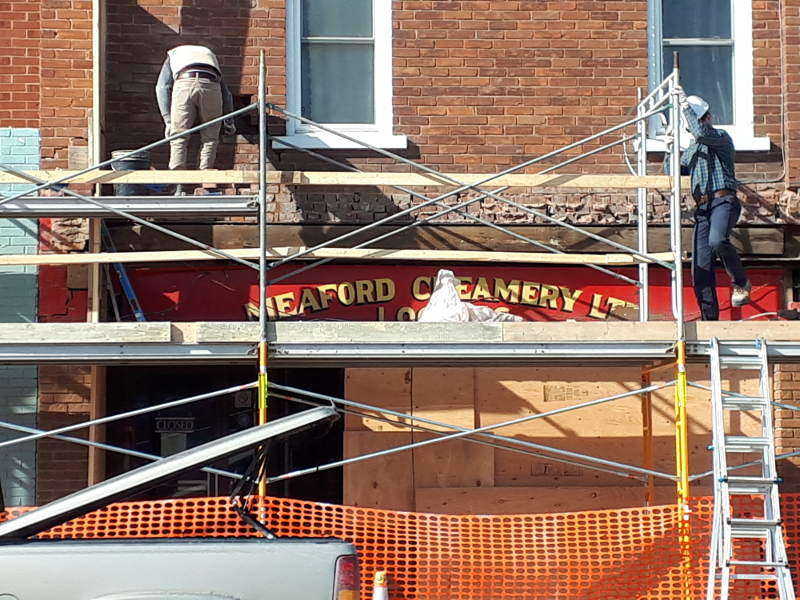 There was quite a stir last week on the main street when an old sign for the Meaford Creamery was uncovered at the AJ Hairworks shop. Searching for some historical information, I was able to sit down with Mr. John (Jerry) Dobie, whose family once owned the business and learn about a piece of Meaford’s history.

The Meaford Creamery plant was first opened in 1921 by Norque Young in a building on Marshall Street that was previously a machine shop, and before that, a Methodist Church. In 1925 the business was bought by John Russell Dobie and his wife Laverne Douglas, the parents of John Dobie. The Dobie family ran the Creamery until its closing in 1968, although for a brief period in the late ’20s it was owned by a Toronto company until J. R. Dobie was able to repurchase it.

Farmers brought their separated cream to the Creamery where it was inspected before they were paid. It was then made into butter and delivered all over the region to grocery stores such as Dominion, A & P Stores, IGA, and many others. While working for his father, John Dobie used to drive twice a week in the summer to Midland on deliveries and once a week in the winter. In the early 1950s, while John Dobie was at the dairy school in Guelph, the Dobies bought Rowe’s dairy. They bought the buildings and business along with Hill’s Dairy and split the equipment that was included in the purchase.

The actual production plant remained on Marshall Street, but the offices were moved to the Sykes location. The Dobies also bought the Beaver Valley Creamery in Clarksburg, and the one in Elmvale in an effort to stay in business throughout the 1950s and ’60s but eventually lost their customers. Mr. Dobie explained that, “at that period of time the producers swung over from farm separated cream to milk production and they increased their barns and herds and their production.” They had no trouble selling their products, especially the butter, but it became increasingly more difficult to procure the separated cream to make it.

So, after 47 years, the Meaford Creamery shut its doors in 1968. They sold their machinery to the Kimberley District Co-operative Creamery Ltd. But the building remained in the Dobie family. For whatever reason, the sign up on the Sykes street location remained up to be delightfully recovered this year and entice us to recall a different time in Meaford’s history.