Too Far Back in the Bush, The Story of Meaford Knights’ Hockey Team and their 1957-58 Championship Season 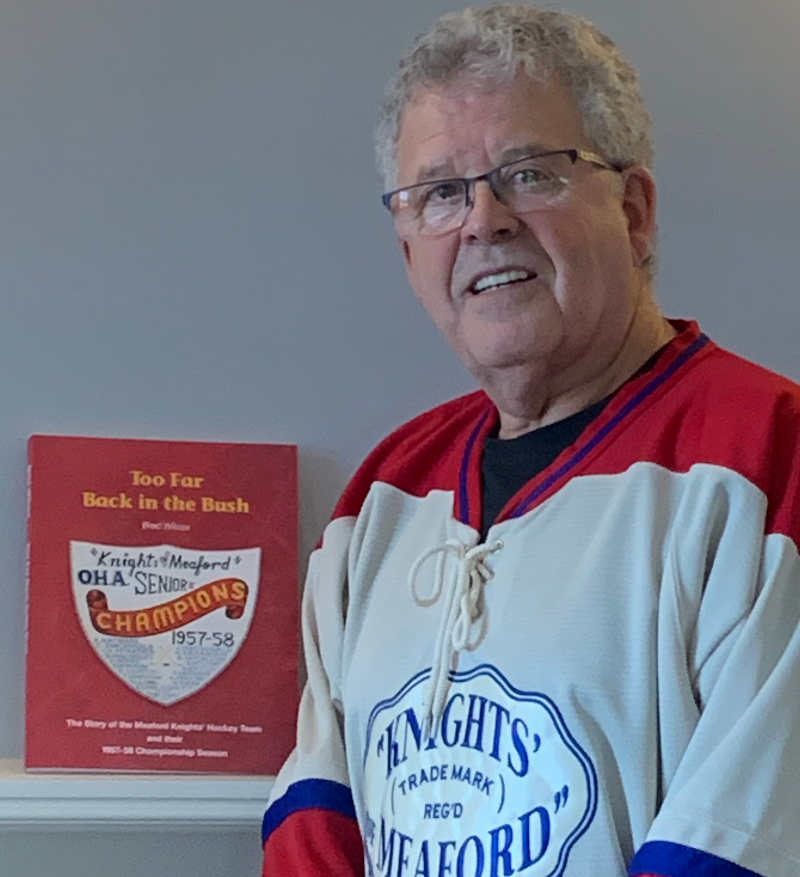 One of Meaford’s most notable moments in hockey history is being retold by sports enthusiast Brad Wilcox, who grew up in awe of the personality greats of the Knights of Meaford Senior ‘B’ team.

In Too Far Back in the Bush, The Story of Meaford Knights’ Hockey Team and their 1957-58 Championship Season, Wilcox recounts the struggles of the Knights team to claim a spot in the Ontario Hockey Association (OHA) playoffs and the ultimate glory when the team won the 1957-58 championship. The 200-page book is rich in statistics, photographs, player profiles, and season-by-season replays from 1953 to 1963.

Knights of Meaford players loomed tall in the minds of young aspiring hockey players and avid fans alike, among them Wilcox, who grew up over the fence from the Meaford arena. With the help of skilled storyteller and hockey great Charlie Macdonald, the author presents 37 stories that bring hockey personalities to life. In Part 2, Tales from the Knights’ Locker Room, the author writes: “Everyone likes to hear a good story and Charlie Macdonald was good at telling them. Some of the tales you will read were gleaned from Charlie’s amazing memory. Tales about characters such as Hap Emms, Bucko McDonald, Muzz Patrick, King Clancy help enhance the legends of local stars Barney Walmsley, the Macdonald brothers, and many others. Many have historical overtones. Others offer backgrounds of players’ budding careers.”

The stories in Tales from the Knights Locker Room are based on interviews with 12 players who provided the author with personal glimpses of team players and others.

Too Far Back in the Bush is written as a tribute to the Knights players, according to Wilcox. “These were very talented players,” he said. “I loved being part of the hockey scene. It was so much fun to go to the arena on a Friday night and watch them play. I wanted to record this moment in hockey history.”

“There were many stars that played during the ten years. The Macdonald brothers, Charlie and John, and linemate Ray McCallum were the top three along with goalie Gordon Henry who played in the NHL with Boston.

“During the championship season (1957-58), eight pros played, including American League star Bill McComb and Tom Jamieson who represented Canada at the World Hockey Championships in 1954 and was voted an all-star. Harry Kazarian who won an Allan Cup and a Mann Cup, and J.D. McArthur were also prominent players and both were Owen Sound natives. Barney Walmsley from Collingwood who won three OHA titles was also a star and should have played pro.

“To secure that kind of talent, coach Tom Sims lured guys from outside Meaford on the possibility of winning the championship.”

Some of the ‘outsiders’ settled in Meaford, played baseball locally off-season, and coached minor hockey. Wilcox himself was coached by Tim Sims, Lew Dunkleman, Bob Meek, and Barney Walmsley.

The history of the team has legendary overtones, Wilcox writes in Too Far Back in the Bush. “What an experience to research and relive the Knights amazing hockey story tradition. From the first year, when Charlie Macdonald brought his friends from Chatsworth to form the inaugural Knights team in 1953 to the disappointing end 10 years later, the story has true legendary overtones.”

The author has connected the names of players and teams and the stories, some familiar, some recounted with a different perspective, some long forgotten, according to Bayshore Broadcasting Sports Director Fred Wallace, who wrote in the book’s foreward: “In Too Far Back in the Bush, the names of the players and teams leap off the pages as you skate with the Meaford clubs from year to year. Hopefully you’ll enjoy it as much as Brad Wilcox enjoyed the connections and the journey and piecing it all together.”

Too Far Back in the Bush is a coffee-table size book, 8 1/2 x 11 with 200 pages that includes 165 pictures and images of memorabilia. The book sells for $40 for a soft cover and $75 for one of the limited number of hard covers. Books are available at the Meaford Public Library, Meaford Museum, or by contacting the author at bradwilcox52@gmail.com.

Wilcox will discuss the book and his experience researching, writing, and publishing Too Far Back in the Bush during the Zoom Book Talk at the Meaford Public Library on March 25 at 2 p.m. Register in advance by calling the library at 519-538-3500 or emailing libraryinfo@meaford.ca

Brad Wilcox was born and raised in Meaford. He is a graduate of Georgian College of Applied Arts and Technology with a diploma in journalism. He played minor hockey and was a member of the Meaford Golden Jets WOAA Intermediate ‘C’ League (1972-73). He lives in Port Elgin and plays old-timers hockey.

One of Meaford’s most notable moments in hockey history has been retold by hockey enthusiast Brad Wilcox in Too Far Back in the Bush, The Story of Meaford Knights’ Hockey Team and their 1957-58 Championship Season. Photo courtesy of author.