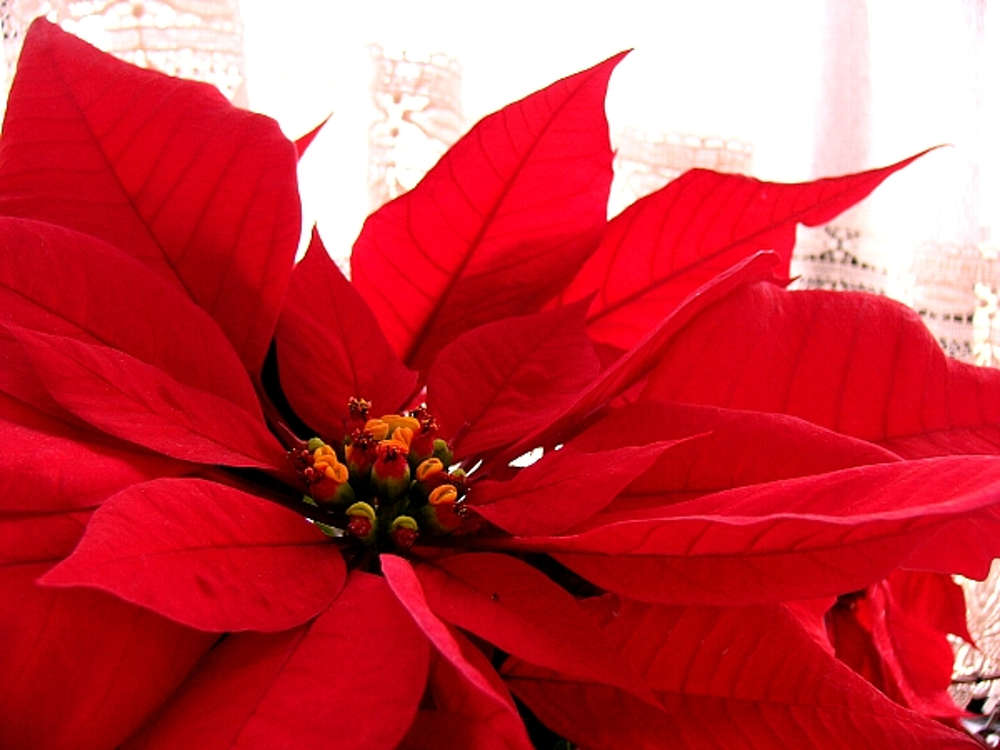 One of the bestselling houseplants of the season is the famous poinsettia, a broad-leafed perennial native to southern Mexico and Central America, whose familiar green and red foliage can be seen everywhere throughout December.

The Aztecs were the first to cultivate this plant which they called Cuetlaxochitl, which means ‘flower that grows in residues or soils’. They used the leaves to make a red dye and the sap was used as an antipyretic, or fever reducer. Its connection to Christmas, however, came in the 16th century with the story of a little girl, Pepita, who was so poor she couldn’t bring a gift to the Christmas Eve service for baby Jesus. Instead she picked weeds from the roadside and placed them at the altar of the church. It is then said that the angels felt compassion for the girl and turned the weeds into beautiful flowers. In Mexico and Guatemala the poinsettia is called La Flor de la Nochebuena, which means ‘Flower of the Holy Night’.

The poinsettia didn’t appear in the United States until several centuries later when the first American ambassador to Mexico, Joel Roberts Poinsett, sent samples of the plant back to his greenhouses in South Carolina. They were then propagated and sent to growers around the country under the name ‘Mexican Fire Plant’. Later they were renamed in honour of Mr. Poinsett.

The massive popularity of the poinsettia didn’t happen until the Ecke family developed a way of growing bushier and more attractive plants. To advertise poinsettias for the winter season they sent plants to television stations across the country to display on their sets, including The Tonight Show. Since then, poinsettias have become the most popular Christmas plant. There is even a National Poinsettia Day on December 12 in honour of Mr. Poinsett’s death, which was made official in 2002 by the United States Congress.

Caring for poinsettias is simple, but it does require diligence. Because of their tropical roots, temperature is a vital for your poinsettia’s health which flourishes best between 65 and 70 degrees Fahrenheit. Place the plant in an east-facing window that receives bright, indirect light for at least six hours a day. Direct sun will fade the leaves. Also make sure the leaves aren’t touching a cold window or near a doorway or heating vent – keep them away from drafty areas.

The most common way to kill a poinsettia is by over-watering. Water only when the soil is dry. Remove foil that will collect water and empty excess water that collects in the tray. Poinsettias don’t like sitting in water, which may lead to root rot. Proper humidity is also key for proper growth. Either have a humidifier in the room nearby the plant or place a tray of pebbles and water beside the plant to help keep the air humid.

Contrary to popular belief, poinsettias aren’t poisonous to humans or animals. One would have to consume a vast amount of the leaves to cause any serious problem. At most, one would have a minor stomach ache or irritate skin. The leaves also have an awful taste which would discourage even the most curious of pets from trying to eat the poinsettia. They do have a latex sap which could cause irritation to someone with a latex allergy.

Poinsettias have been ingrained into our minds as a Christmas plant. With their showy red and green leaves, they fit perfectly into the season and will be around for a long time.