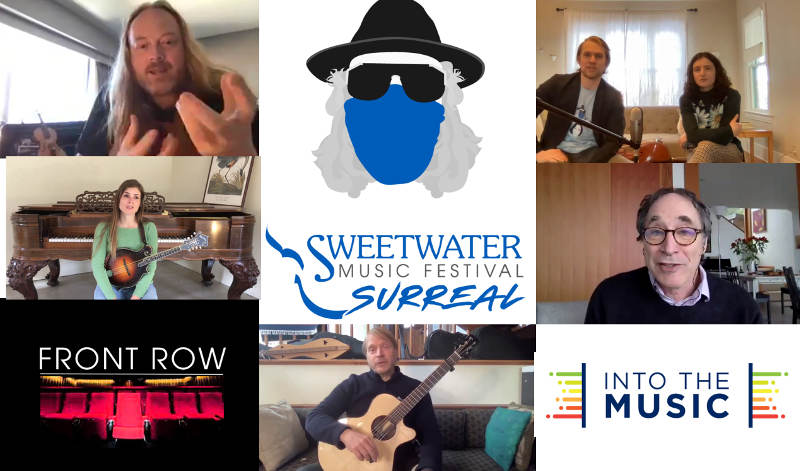 The SweetWater Music Festival is providing a much-needed distraction from lock-downs and the cold winter weather by offering virtual music programming until the end of March. It’s all part of SweetWater Surreal, the multifaceted, multi-platform music experience which began in late August this past year.

“We felt it was crucial to provide our patrons, music lovers, and the entire community with music throughout this winter,” explained SweetWater Artistic Director Edwin Huizinga. “It has been a challenging time for all of us and music is a great way to soothe the soul and mind. It’s something many people have told us since we launched Surreal late last summer.”

New episodes of Front Row were released in January featuring guitarist William Coulter and multi-instrumentalist Ashley Hoyer. Along with getting to know these musicians up close and personal, you can enjoy a music performance from the comforts of your home. In the second half of February, new episodes will be posted featuring members of the baroque string ensemble Acronym. Past episodes featuring accomplished musicians including Measha Brueggergosman can be found at sweetwatermusicfestival.ca.

Early in the new year, SweetWater launched a new series of online interactive conversations with accomplished musicians from Canada and beyond, Into the Music. Hosted and moderated by Edwin Huizinga, people can register in advance and ‘Zoom’ in on the session and even ask questions. The first two sessions featuring Keith Hamm and Julie Hereish and another with Marc Destrubé are also available as audio podcast editions now posted on the SweetWater website. New Into the Music sessions are planned for late February and running until early spring.

“Both Front Row and Into the Music are also ideal for young musicians who want to know more about a life in music and what it’s all about,” added SweetWater General Manger Paul Eichhorn. “We want these free online resources to be something music students and teachers can utilize, especially during a time when in-person visits by musicians is impossible.”

SweetWater Surreal included 12 live concerts staged in Owen Sound and Meaford in September and late October. While many live performing arts organizations opted to take a year off from live performances, SweetWater felt it was essential to find a way to bring music to people in person. Close to 700 people enjoyed these Surreal concerts at various outdoor venues as well as at one indoor concert. Special precautions were taken to ensure the health and safety of all in attendance. SweetWater is now posting video highlights from some of these concerts at sweetwatermusicfestival.ca as part of SweetWater Encore.

SweetWater also staged its first livestream this past fall during a live concert featuring Measha Brueggergosman. Through a partnership with Owen Sound-based CTRE, the concert was enjoyed by many at home. It was a perfect, safe alternative for those who didn’t feel comfortable attending a concert in person.

Though SweetWater Surreal will wrap up in early spring, SweetWater plans to continue these new online initiatives over the months ahead including as part of its 17th festival SweetWater 2021 (September 16 – 19).

“Many of the things we did over the past year were prompted by the pandemic,” admited Eichhorn. “Based on the response to date, we realize much of this new online virtual programming is something we will continue to offer along with live performances. It’s now part of the new normal.”