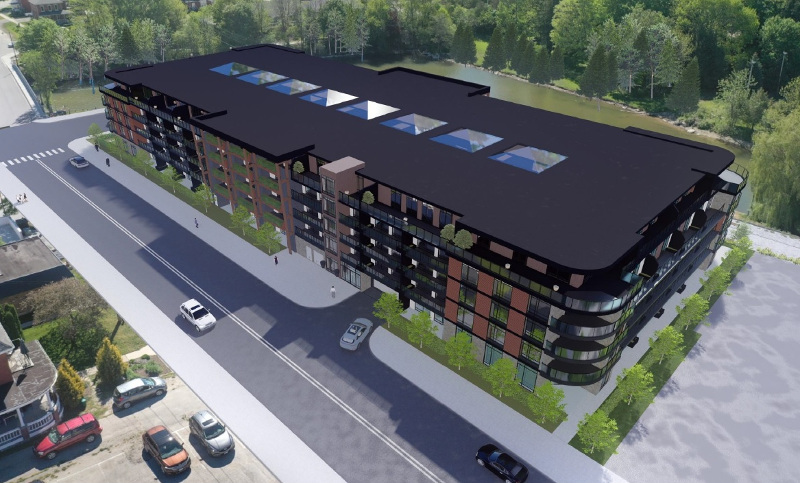 A proposed five-storey, 160-unit residential building at the corner of Trowbridge and Bayfield Streets, alongside the Bighead River in Meaford’s harbour area, was the focus of a public planning meeting held on Monday, May 16, at Meaford Hall.

Proponent AvranceCorp Developments, which is also developing a 150-unit building on the former Legion property on Legion Road called Georgian Bay Terrace, is requesting an amendment to Meaford’s Official Plan along with a zoning bylaw amendment in order to proceed with the development. Avrance made a presentation to council outlining the proposed design and amenities for the riverside building.

Council and the public were told that the proposed development, to be known as the Georgian Bay Harbour Development, will occupy more than 3,600 square metres of land, roughly three-quarters of the total size of the lot, and will be 15.5 metres tall. Described by the developer as ‘luxury living’, the proposed building would include underground parking, a swimming pool, and a gym. The developers told council that the units in the building will range from just over 500 square feet to roughly 1,500 square feet, some of which could be rental units.

Although the property, currently designated Downtown Core Commercial as well as Environmental Protection, is also subject to a Two-Zone Flood Policy Area, the developer is seeking a site-specific exception policy for the property in order to allow the development to proceed by permitting an apartment building to be constructed on the site. The municipality established the floodplain area policy for the inner harbour area in 2014.

A number of residents participated in the public planning meeting, both in person and virtually, and those attendees, along with members of council had a number of questions and concerns about the proposed development.

Concerns expressed included the high density of the proposal which would see 160 units on a small parcel of land, the height of the building, environmental concerns given the property’s proximity to the river, along with significant concern about flooding and the proposal to build a two-level underground parking garage, with some calling the plan “irresponsible”. Residents also noted that the proposed development does not meet the municipality’s Official Plan, while others noted the large scale of the proposed building, which would be among the largest in the municipality.

“Seriously flawed” is how one resident described the proposal, a comment that drew applause from those attending the meeting.

Also discussed was the significant number of development proposals currently in various stages within the planning process, and questions about the impact on the community should some of these major development projects within close proximity to each other be built over the same time period.

Municipal planning staff reminded council and the public that any developer can submit a development proposal along with zoning or official plan amendment requests, and that a proposed development is just that: proposed.

“In terms of the application that’s at hand, and the request that has been made, I just wanted to remind (the public) that we are currently in the process of reviewing the application. So there’s been no determination,” noted Robert Voigt, Meaford’s Director Of Development Services. “We can’t vet an application before it comes to us, so if it is out of line with policy direction, or more specific requirements, say, under the heritage provisions we have, or the height restrictions, then at the time of review that will be identified by us or other reviewing agencies. So just reminding folks that this is the beginning of that review process, it’s not like we can stop someone coming through the door with an ask that is perhaps too big.”

Deputy Mayor Shirley Keaveney thanked those who participated in the meeting and noted that the developer is “asking a lot”, with the proposal, and she also had a word of advice for the proponents.

“Just a word of advice for you if I may. As Deputy Mayor of this municipality, I found out about this project on Facebook, and I can tell you that did not sit well with me, and a project of this magnitude needs to be presented to council in another manner,” said Keaveney.

Where to find more information:

To view the materials submitted on this application, visit the municipal website at: www.meaford.ca/developmentstatus (see: Georgian Bay Harbour Ltd.)

Application materials are also available in the Municipal Administration Office during normal office hours. Contact the Municipality at the phone number below for more information.