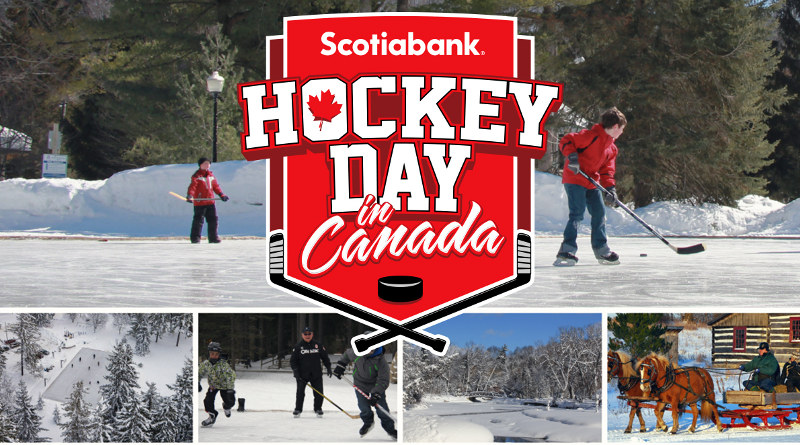 As announced last week during a press conference at Harry Lumley Bayshore Community Centre, Owen Sound has unveiled event details for the upcoming Scotiabank Hockey Day in Canada celebration in partnership with Sportsnet and Scotiabank.

Taking over Owen Sound from January 26-29, the four-day celebration will feature can’t-miss community events, hockey clinics, musical performances, and appearances by NHL Alumni and the Stanley Cup. The celebration culminates Saturday, January 29 with a day-long Sportsnet broadcast hosted by Ron MacLean live from picturesque Harrison Park. All festivities will be in compliance with local and provincial health and safety protocols.

“The City of Owen Sound is proud to be hosting the 2022 edition of Scotiabank Hockey Day in Canada”, stated Mayor Ian Boddy. “In partnership with Scotiabank and Sportsnet, this historic four-day event will shine a national spotlight on our city and allow our community to celebrate together, sharing our rich hockey history and the natural beauty that is Owen Sound with all of Canada. I want to acknowledge the efforts of our Local Organizing Committee and the overwhelming support received throughout the community from our corporate sponsors. The schedule of events has something for everyone to participate in regardless of age. This will truly be a community event that we will all take pride in.”

“We are excited to continue the tradition of Scotiabank Hockey Day in Canada in the storied town of Owen Sound,” said Joel Darling, Executive Producer, NHL on Sportsnet. “As a passionate community rich in hockey history, we at Sportsnet look forward to visiting the beautiful Owen Sound community and celebrating its people and stories on the national broadcast this January.”

“For 12 years, Scotiabank Hockey Day in Canada has connected hockey with community, building memories and experiences for the communities it has travelled to and empowering hockey’s next generation,” said Rhonda White, Branch Manager at Scotiabank. “Scotiabank is committed to making a difference in our community, whether it be through long-standing programs like the Scotiabank Community Hockey Sponsorship Program or our new initiative hockey for all. I am so incredibly proud that this year Scotiabank Hockey Day in Canada is stopping in Owen Sound.”

The event schedule for the 2022 Scotiabank Hockey Day in Canada celebration in Owen Sound includes:

Ticketed events open to the public include:

· Music of Hockey Day at the Roxy Theatre;

· NHL Hockey is for Everyone Breakfast with Andrew Ference and the Stanley Cup®;

Commemorative Scotiabank Hockey Day in Canada merchandise is also available in limited quantities at the Attack Shack in the Harry Lumley Bayshore Community Centre or online.

A full schedule of events, ticketing, and volunteer information is available at www.owensound.ca/hockeyday. All events are being planned in accordance with provincial and local COVID-19 regulations and in consultation with Public Health.