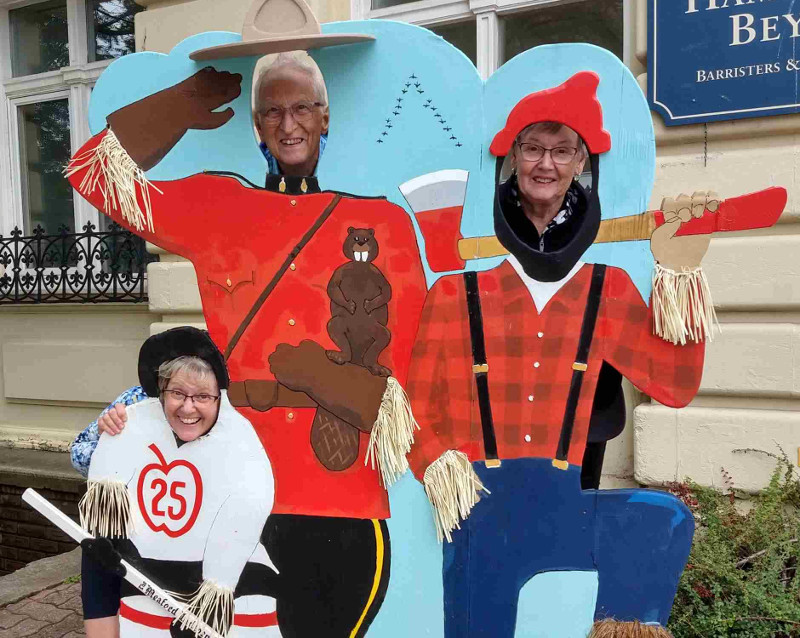 Twenty-five years of scarecrows in Meaford. Wow. Did anyone think when the first scarecrow was put up in downtown that it would explode into the annual extravaganza it has become today? But where did it begin? For those who haven’t grown up in Meaford or have moved here recently this is a short history of the festival.

The first Meaford Scarecrow Invasion and Family Festival was held in 1996 when a local business man, George Potopnyk, wanted to boost tourist shopping in the downtown area. The next year a local resident got involved and a parade was added featuring children dressed as scarecrows. By the next year scarecrows were popping up everywhere once Labour Day was over and the Invasion had become a popular attraction to people beyond the community. In 2000 Marilyn Morris took over as the ‘Head Scarecrow’, one bushel of apples was given away along the parade route, and four volunteers put 25 scarecrows up around downtown. Now there are hundreds of volunteers who meet and work from January onward discussing the event and adding activities, stuffing and dressing scarecrows (now hundreds), and decorating the town. A theme was added to each year starting with ‘The Wizard of Oz’, and including others such as movies, children’s books, music, and the circus.

Meaford’s claim to fame was as the Apple Capital of Ontario but it now has the Scarecrow Invasion, which has become synonymous with the town. Friends, family, and tourists now flock to the municipality to see the scarecrows and walk the downtown core or up to Station Hill. Businesses get involved too, each creating their own display, which is judged each year and the winner is awarded ‘The Best of the Best’ trophy.

It is fun, it is quirky, and it is most of all Meaford. So don’t forget on Friday, September 30, to attend the parade, witness the apple pie contest, and just enjoy the fun of living in a small town.