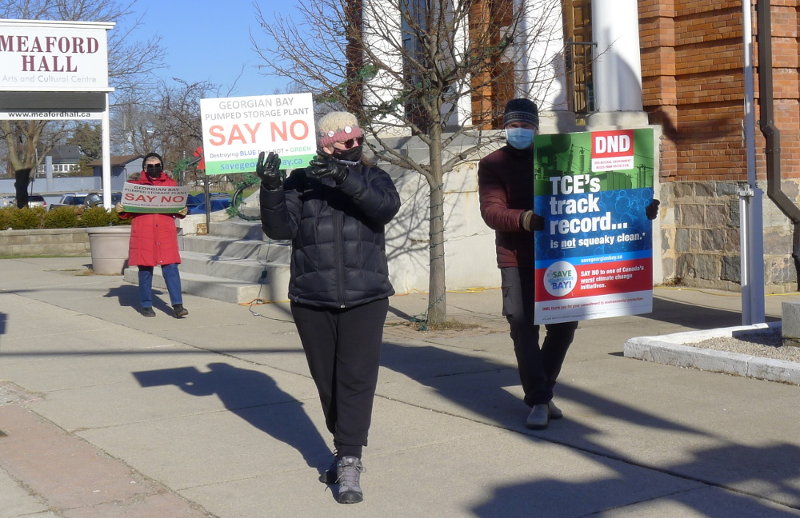 Local advocacy group Save Georgian Bay continues their opposition to the proposed pumped storage facility on the Meaford Tank Range, and this week they made a presentation to Council outlining their concerns and the work they have done to date. They also presented council with a petition signed by more than 3,000 individuals opposing the proposed project.

Save Georgian Bay also had a request for Council – that they publicly support their opposition to the project.

“Our group formed in the summer/fall of 2019 with the mission of educating Ontario residents surrounding Georgian Bay about the proposal from TCE to use Georgian Bay waters and land in ways that will harm the environment and put community members at risk,” Save Georgian Bay member Tom Buck told Council at their December 13 meeting. “Save Georgian Bay’s mission is to inform Canadians who live near and love Georgian Bay of the proposal for a large Hydro project in Meaford, which will harm land, water, flora, fauna, fish, and residents around and in this precious Bay.”

Prior to the council meeting, a handful of Save Georgian Bay members held a protest outside Meaford Hall, with members carrying placards expressing opposition to the project.

Members of Save Georgian Bay noted that between the proposed reservoir and the bay are a number of residential homes, and they also suggest that the system would be wasteful.

“Every time the reservoir is filled, it will draw water from the bay plus everything living in that water. The 30% inefficiency of the PSP is also a huge waste of electricity that could otherwise meet the energy needs of a city the size of Barrie or 16 Meafords,” Bruce Rodgers, Environmental Consultant, and member of Save Georgian Bay, said last year.

Project proponent TC Energy, on the other hand, says their $4.3 billion proposal is a green initiative that would consume inexpensive off-peak power at night to pump water from Georgian Bay into a 374-acre storage reservoir located 150 metres above the Georgian Bay shoreline on the military base. The reservoir, which would hold 20 million cubic metres of water, would be emptied back into Georgian Bay during peak usage periods, driving hydraulic turbines to generate electricity.

On July 28 the DND issued a statement regarding the proposed pumped storage facility.

“The Department of National Defence has signed an Agreement in Principle with TC Energy that will see the company advance to an Impact Assessment for a proposed hydroelectric pumped-storage facility at 4th Canadian Division Training Centre Meaford (4 CDTC),” the DND advised. “This Agreement in Principle provides that the project could operationally co-exist at 4 CDTC if it does not impact military activities and training. It is anticipated that TC Energy will soon pursue additional Impact Assessment and Environmental Assessment processes with both the federal and provincial governments. Should these assessments be positive, TC Energy may then seek a licence for the project under the Dominion Water Power Act (DWPA). The DWPA requires that the land remain Crown property. Importantly, the Agreement in Principle confirms that the project will not move forward unless all necessary provincial and federal assessments are completed, including required regulatory approvals, and mitigation is in place for possible impacts to planned and future operations and training capabilities at 4 CDTC Meaford.”

While the DND has given the green light, with conditions, to the proposed facility being developed on their land, there has not yet been any agreement with the Saugeen Ojibway Nation, who TC Energy says must offer their approval before the project would move forward.

“Today we provide Meaford’s Mayor and Council members with a copy of our petition containing 3,300-plus signatures of those opposed to the project,” Buck told Council on December 13. “These people and many others want you to join us, to oppose this harmful and risky project.”

Council has been reluctant to take a firm stand on the proposal until environmental impact studies have been completed and the results are available for review.

In 2020, Council directed staff to retain a Project Manager to coordinate the peer review of studies and to negotiate an agreement with TC Energy with regard to compensation of the municipal costs for that review.