Reviews by Suz – Saturday Night at the Drive In 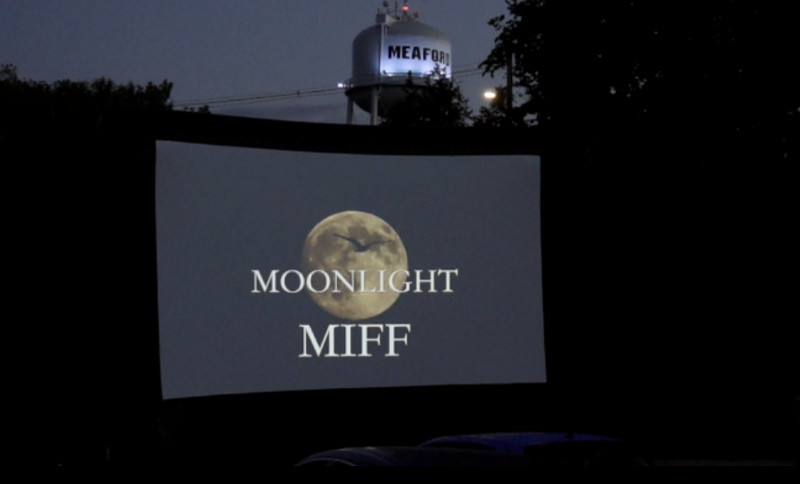 Saturday night was a time for nostalgia. A drive-in movie, with popcorn no less!

Every Labour Day weekend for the past 15 years, MIFF, the Meaford International Film Festival, was held, with wonderful dinners, four films in Meaford Hall, and amazing after parties. This year, as a nod to COVID and the restrictions of social distancing, the Meaford Culture Foundation changed it up and created Moonlight MIFF, with two drive-in movies, on Saturday, September 4, and Sunday, September 5.

Now you’re no doubt asking, there’s a drive-in in Meaford? A inflatable screen was installed at the upper parking lot at the arena, and cars were directed to park in rows facing the screen.

Earl and I arrived just before the film began, with live music from local electric violinist Victoria Yeh and her guitarist, which we so much enjoyed we will download her digital album.

We were very much looking forward to seeing Saturday’s film Pirate Radio, a previous audience choice favourite (receiving the Pomme D’Or award), and we enjoyed it greatly. It’s a film about the pirate radio ships operating off the coast of England in international waters in the North Sea in the late 1960s and early ’70s. The BBC was only allowed to broadcast classical music, so to fulfill the wishes of the vast population of younger listeners pirate radio ships broadcast rock ‘n roll. The government of the day was not amused, and things began to go awry.

After the movie, there were several other items on the program, including an interview with an actual pirate radio DJ, and another film, John Muir at Trout Hollow.

The Moonlight MIFF event was extremely well organized – kudos to all the volunteers! We especially enjoyed the nice touch of having a popcorn maker at the entrance, handing out fresh popcorn to every person in the car. I’m hoping that MIFF might consider making it an annual event, in conjunction with the regular MIFF, for those who like to watch alternative films.

So much fun, and a great experience!