On My Book Shelf: The Apollo Murders, by Chris Hadfield 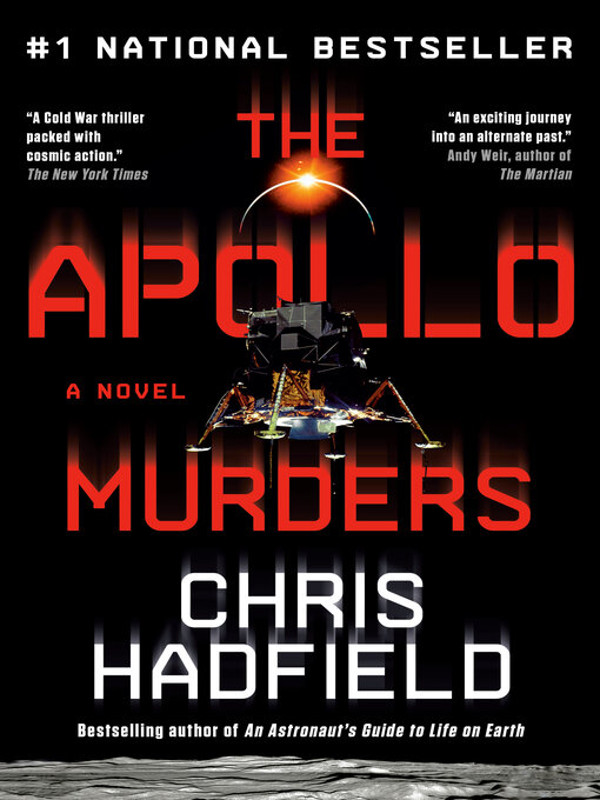 A Review by Beth Ryan Aitken

There is an old adage for authors. Write about what you know! And in The Apollo Murders, author Chris Hadfield has certainly done just that. Though he really doesn’t need any introduction, Hadfield is a retired NASA astronaut, engineer, fighter pilot, former commander of the International Space Station, musician, and of course, Canadian. In this, his first fictional thriller, he gives us a glimpse of the wonders of space, the thrill of space travel, the interworking of NASA, and on top of all that, some good old-fashioned Cold War intrigue.

Set in 1973, all this takes place against the backdrop of a very different US/USSR relationship. Former test pilot and astronaut candidate Kaz Zemeckis has been assigned by NASA to Houston as crew liaison as they prepare to launch Apollo 18. Kaz is one cool cat; he drives fast, works hard, and faces challenges with intensity and dedication. Within weeks of the planned launch, the mission of Apollo 18 changes radically to allow for some outer space spying and sabotage against the Soviet Almaz space Station. Kaz is involved behind the scenes and with privilege to top secret intelligence, with a link directly to the White House. The intrigue is intense, and as the title suggests, people will die.

Hadfield brings so much authenticity to this book. From the very beginning, where we learn why Kaz is no longer a candidate for space travel, to the final splash down, Hadfield places us in the middle of the action. Every instrument panel, pressure sensor, and engine thrust is realistically described. We learn early on how something as innocuous as a stifled sneeze by an engineer soldering a circuit can disarm the primary voice circuitry in the Command Module. We even find out how the astronauts handle farting and vomiting aboard the space craft!

Another technique Hadfield employs is to incorporate real characters and events into the fiction. In fact, the end of the book includes a four-page glossary of real people, places, and events referred to in the book. Being of an age that I remember the 1970s, the Nixon era, and many of the Apollo missions, I found it fascinating to come across these people and actual events which gave so much ‘truth’ to the story. Some reviewers have described this genre as ‘Alternative Fiction’. I find that such an interesting concept to craft a narrative from both real and imagined events, creating a scenario both familiar and foreign at the same time. Rarely have I seen it used as impressively as Hadfield has done. The book offers a real education on space travel while pursuing a thrilling yet completely fictional premise. My internet search of reviews on this book found not only the expected sites (the New York Times, the Globe and Mail) , but also several very science- and space-specific sites (The National Space Society, Space.com, and New Scientist).

I recommend this book for any reader, but especially those interested in space travel or a good thriller. It has so much to offer. To quote Kirkus reviews, “Space nerds will geek out and everyone else eventually gets a pretty good ride!”