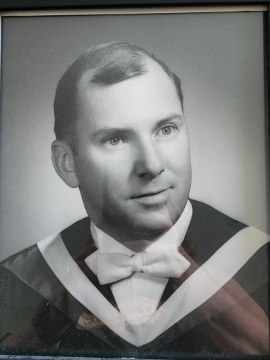 Bill was born in Owen Sound in 1934 to Doris (nee Fordham) and Lucas Summers. He lived and grew up, with his sister Lois, in a tiny brick house on 14th Street West. When Bill was 17, he went to work at Gavillers Accounting Office and became a Chartered Accountant. During this time, he met his future wife, Edith Clara Bentley, when he went into the office of Bell Telephone one day to pay a bill. A few years down the road, he was encouraged by Edith to attend Wilfred Laurier University to get his teaching certificate. Shortly after, he joined the staff at West Hill Secondary School as a business teacher and taught countless students over his career.

Bill didn’t just help students grow though. In 1974, with the purchase of Marshall’s Farm in Keppel Sarawak Township, he became a farmer and applied his nurturing nature to the growing of vegetables and berries and cultivated a successful market garden business. People would come to Garden Acres throughout the summer to buy fresh produce and Bill was happiest driving his tractor through the fields to pick another bushel of corn or to dig a bunch of carrots. He could be found every Saturday morning, with Edith and his three children Lisa, Susan, and Robert, at the Owen Sound Farmer’s Market selling his produce.

While Bill possessed a strong work ethic, he did find time to enjoy the finer things in life such as family pets (dogs, rabbits, kittens, a goat, and a couple of horses), golfing, and making homemade wine and dill pickles. He enjoyed family time. He could be found in the kitchen making bacon and eggs on Sunday mornings, peeling potatoes for dinner, peeling apples in anticipation of apple pie for dessert (made by Edith), and pitching in with the dishes. In retirement, long before HGTV made it popular, Bill enjoyed flipping houses and these projects kept him and Edith moving around from Owen Sound to Burford and then to Paris, Ont.

When grandchildren came along, babies were scrubbed clean, by Bill, in the kitchen sink. He enjoyed spoiling them with weekend breakfasts and sleepovers. Driving lessons began on the golf course with the grandchildren ‘driving’ the golf cart. Most importantly, he taught both his children and grandchildren to respect other people no matter where they came from and their situation in life. And, he instilled the importance of working hard, the value of a dollar earned, and saving for a rainy day. Investment advice was always free!

Bill was a kind, caring man who always thought about others and took care of others. He will be greatly missed by family and friends.

Cremation has taken place and a family service will be held. Interment Greenwood Cemetery, Owen Sound.

Donations to Alzheimer Society or St. James Anglican Church would be appreciated.

Online condolences and donations may be arranged through www.wmkippfuneralhome.com

Special thanks to the Staff of Sunrise Court, Park Lane Terrace for all their care and support of Bill.