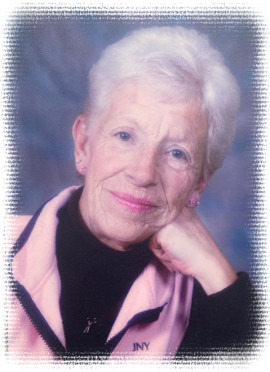 With great sadness the family of Irene Wilma Perry-Rogers announce her peaceful passing at the Meaford Hospital on Friday, March 4, 2022, at 80 years young.

She was a daughter of the late John Allan and Ruby (nee Donnithorne) Metherel, and was lovingly raised by Harriet Amybell Wonch.

She was the loving mother of Debbie Macdonald (Greg), Mitch Perry (Sue), Rob Perry (Jan), and Ginger Rogers. Irene was the proudest of all Grannies of Tom and Tara Macdonald, Bronwen, Hayden, and Chandler Perry, Tyson and Jared Perry, and Spencer Osborne. Her heart burst with happiness with the arrival of great-grandchildren: Hunter Macdonald, Gwen and Maeve Perry. Special mention to Teisha and Maggie Harvey, who held a special spot in Granny’s heart.

Much loved sister of Betty Elliott and Lloyd (Betty); predeceased by siblings Bernice McCrae, Allan, Don, Bernard, Howard, and George. Dear sister-in-law to Willie (Ken) and Wendy Rogers, Bob (Robert) Miller, and Patty Metherel. Predeceased by her sister-in-law Muriel Minerva Ellis-Miller, her nieces Kim and Bonnie Metherel and nephews Scott and Rob Metherel. Auntie Irene was dearly loved by so many nieces and nephews. They were always welcomed with a big smile, a hearty laugh and a huge hug.

Her love for people didn’t stop with family. Many people from the area and from other provinces called her ‘My second Mum’. She became ‘Granny’ to many friends of her grandkids. And we can’t forget that a few special people in her life got to call her ‘Muzzie’.

Many people will remember ‘Rene’ as the “little lady with the big smile who did my hair.” She operated or owned many businesses in Meaford. Some people may remember the ‘Hairport’, or ‘Irene’s Sophisticut’, and no one will forget her beautiful smile or her quick wit!

Never someone to sit still, Irene always took to adventure. She travelled to Europe and went on a cycling trip with Janny Jongkind-Scarrow. Irene laughed a million times with Fran Austin while sitting in a car on the main street of Meaford. Or when she and Alva Campbell would have to go fetch “the boys” from whatever mishap they were in. Others knew Irene as a fantastic hostess for many a party was had on the farm in whatever sporting season it was! And lastly, her friendship with ‘cousin’ Janet Juniper was rekindled and gave her so many laughs before her departure.

Our family will be forever grateful for all the friends and family that have reached out to us. They have reminded us of our mom’s kindness, humour, and her incredible hugs.

A private family service and a public Celebration of Irene’s Life will be announced at a later date.

As your expression of sympathy, donations to Meaford Hospital Foundation or a charity of your choice would be appreciated and may be made through the Ferguson Funeral Home, 48 Boucher St. E., Meaford, ON, N4L 1B9, to whom arrangements have been entrusted.