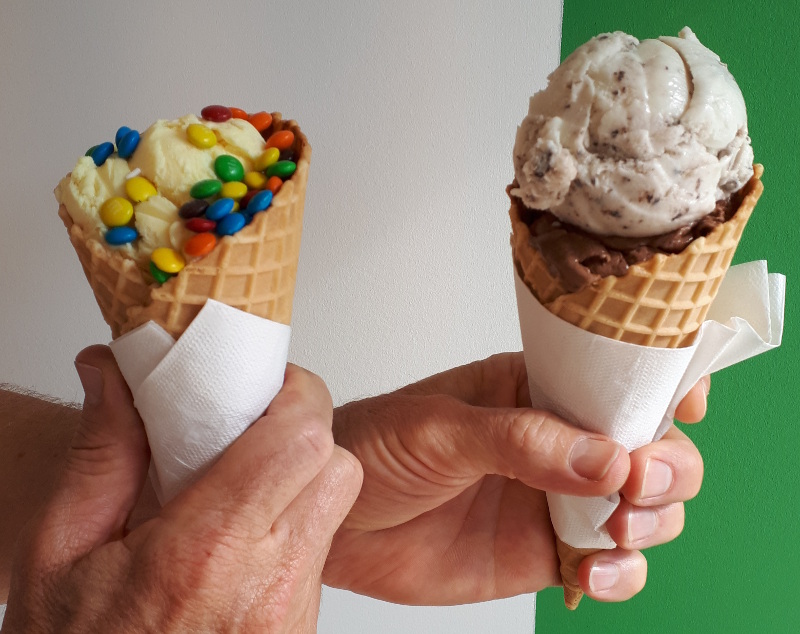 Ice cream for everyone was the vision from day one for Rheanna Kish and Andrea Greyerbiehl, owners and operators of the newly opened Pom Pom Treats on Sykes Street in Meaford. In addition to traditional ice cream, no matter the allergy or dietary restriction, they have an incredible treat for anyone who comes to their shop.

What began as a summer hobby in 2015 has exploded into a full-time business with two locations and an expanding wholesale distribution of their plant-based ice cream. When they first conceived the idea to run an ice cream shop together, they knew they wanted a good plant-based option for customers but couldn’t find any that scooped well, tasted good, and was available in large quantities. They quickly found London Ice Cream Company for their dairy option, but eight years ago when they were searching for a vegan or plant-based alternative, there were few out there who made it. This led to Rheanna and Andrea making their own.

Demand has certainly grown in the past few years as more people want plant-based foods. Pom Pom now sells their product wholesale both in pint size and larger sizes. With the wholesale aspect of the business growing, Rheanna and Andrea began looking for commercial spaces to keep up production. Then last year while out Christmas while shopping, they heard of the opening on Sykes Street and quickly got out their measuring tapes to check out if the space was the right size. Their original intention for the space was only production, but with a lovely street front, another retail space just made sense. This new store front operates like the original in Thornbury but with a few additions like take away ice cream options and fun merchandising.

With a wonderful community of support from friends and family, and an incredible staff, scooping ice cream has really become the dream for Rheanna and Andrea.