Meaford’s Debt Has Been Declining For a Decade, But That Will Soon Change 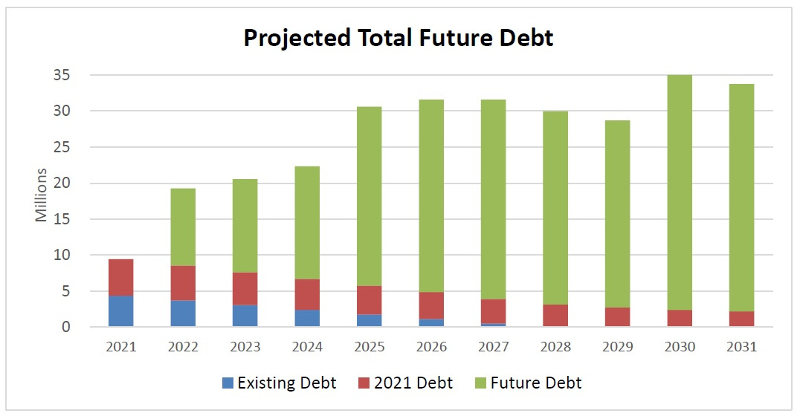 Over the past ten years Meaford’s long term debt has steadily declined, from more than $10 million in 2010, to roughly $5 million in 2020.

While the municipality’s long term debt has been shrinking for a decade, new debt will be required in the coming years in order to complete some major projects, including bridge rehabilitations and an expansion of Meaford’s wastewater treatment plant.

“Ultimately we’re in really good shape right now from a debt perspective,” Treasurer Darcy Chapman told Council at their February 22 meeting. “Without incurring new debt, everything we have on the books right now would be paid off by 2028. So things are good from the existing debt perspective. That might not be the case moving forward however.”

Chapman told Council that there are some major projects on the horizon.

“The reality is that we have a number of projects that either require debt in the next few months, but we also have a lot of projects coming down the pipe in the next little while that will require debt,” Chapman advised. “If all of those projects move forward as scheduled, especially if we don’t receive some government funding, by 2030 I’m anticipating that we could be in as much as $35 million in total debt.”

The municipality’s debt management policy aims to ensure that Meaford’s tax-supported debt not exceed 75 percent of general revenues. Currently Meaford’s debt ratio is sitting at 12.12 percent ($2.65M / $21.9M). Council was advised that additional debt of approximately $2.25 million will be issued for the new Library facility in 2021.

The policy also dictates that no more than 50 percent of the total tax-supported debt capacity will be used for infrastructure unless approved by Council. Currently this debt ratio is roughly 4.2 percent.

Additional debt will be taken on in 2021 as follows:

“In the province of Ontario, municipalities have the authorization to incur long-term debt for municipal infrastructure as long as annual debt repayments do not exceed 25% of net revenues. The Province provides an annual statement for municipalities known as the Annual Repayment Limit statement, outlining the revenue and debt servicing calculations. The Municipality of Meaford’s 2020 ARL statement illustrates that the Municipality is utilizing 4.05% ($888K/$21.89M) of net revenues to service debt and is only utilizing 16.2% ($888K/$5.47M) of the legislated capacity of net revenues,” Chapman advised Council. “It is projected that as much as $35 million in total debt may be outstanding by 2030. This is in large part due to future funding of bridge reconstruction projects and a wastewater treatment plant expansion.”

Chapman advised Council that the municipality has the capacity to take on additional debt of up to $57.15 million at an interest rate of five percent over 20 years.