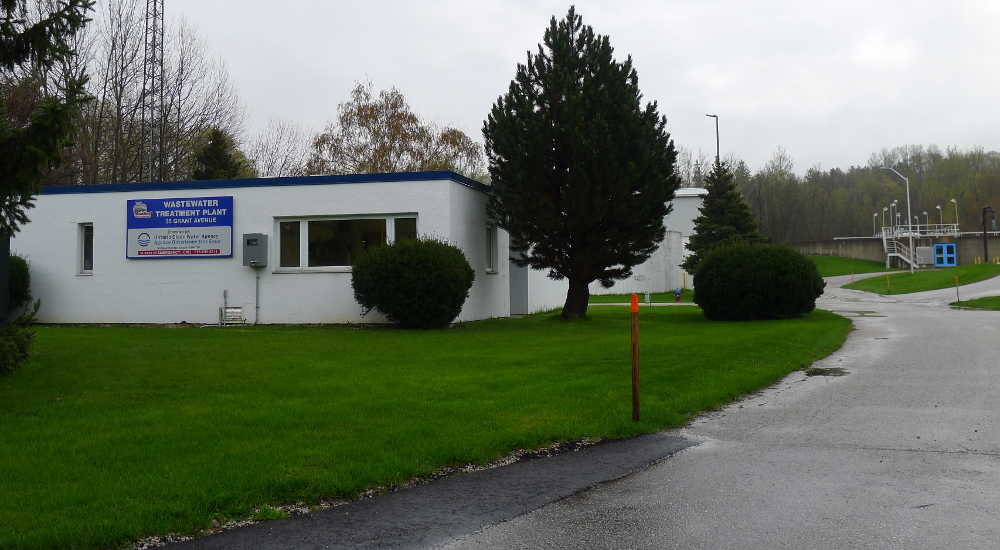 A growing number of proposed residential developments in the municipality has reignited concern about the capacity of Meaford’s wastewater treatment plant.

The facility, located on Grant Avenue near Memorial Park, has a reported three-year average of operating at 75.8 percent capacity, however inspections have suggested that as much as half of the water treated at the plant is a result of high inflow and infiltration from rain and snow-melt.

“We are treating a lot of rain water,” Meaford Treasurer Darcy Chapman told Council in late 2020.

Additionally, roughly 16 percent of Meaford’s wastewater mains are in poor condition allowing rainfall and snow-melt to infiltrate the system. Some older properties in Meaford’s urban area even have storm water connections directly into the wastewater system.

Recently, Council gave direction to staff to advise the development community in writing of the current capacity constraints at the wastewater treatment plant, along with the process that the municipality plans to undertake in order to address the issue. Council also directed staff to develop an inflow and infiltration strategy to address critical areas within the system in order to regain some capacity. Staff was also directed to develop an uncommitted sewage reserve capacity implementation plan for future development.

In a report presented to Council in November, staff advised that, “In 2007 the Municipality retained the services of Earth Tech Canada Inc. to complete a Schedule C Municipal Class Environmental Assessment (Class EA) for potential expansion of the Waste Water Treatment Plant (WWTP). The Class EA was triggered by the capacity analysis completed by Ainley and Associates Limited in 2006 and peer reviewed by Hydromantis, Inc. The capacity analysis identified that the plant capacity was over 80%. Since 2007 the average daily flow (ADF) have fluctuated between 55% and 80% of the rated plant capacity. The capital costs required for the expansion to the existing plant were identified in 2007 to be $18,425,000 with an additional $3 million required to add tertiary treatment to the plant.”

While the issues had been identified, in 2007 Meaford was not in a position to fund an expansion of the facility.

“Following completion of the 2007 Class EA it was determined that the Municipality did not have necessary funds to proceed with the preferred solution identified in the evaluation. In 2010, Genivar Consulting LP was retained by the Municipality to re-evaluate the design population and consider alternative options with reduced funding requirements to expand the plant capacity for future development. The revised evaluation identified a 20% expansion to the existing plant which would add capacity of approximately 605 residential units.”

In 2015 the municipality initiated a Class EA addendum process obtaining proposals to complete the required work, however at the time wastewater volumes at the facility were at a decade-low with the plant operating at only 56 percent capacity, and it was decided Meaford would not move forward with the project at that time.

Staff advised Council in November that annual capacity allocation reports are generated by staff in order to monitor capacity.

“The 2019 report identified that the 3-year average daily flow (ADF) at the plant is 75.8% of the rated capacity with the highest historical ADF in the past 3 years occurring in 2017. The peak flows at the plant exceeded the rated capacity and can be attributed to heavy rainfall and snow-melt. The significant peak flows confirms that excessive extraneous flow enters into the waste water collection system resulting in a large volume of storm water being treated unnecessarily by the WWTP,” staff advised Council.

Concern about the capacity of the wastewater treatment plant is heightened by an increase in proposed developments in the urban area of the municipality.

“The Municipality is experiencing significant pressures related to development. There have been a lot of properties over the last few years where interest has been expressed for development, however many are now moving to the approvals and construction stage,” staff advised Council. “In order to consider the development anticipated, the Municipality will need to proceed and address plant capacity.”

Increasing wastewater treatment capacity will come at a cost. The most recent estimates from 2015 suggest that some $26 million would be required, $21 million of which was expected to be funded from growth.

Staff advised Council that more that $1 million is currently held in reserves for the wastewater treatment plant expansion.

“The 2019 Development Charge Year End Report noted that, currently the Municipality is holding $1,184,341.11 in reserves for works at the WWTP related to the expansion. These funds are expected to be enough to cover the cost of an updated EA and the design engineering costs for an expansion,” advised staff.

Addressing the wastewater treatment plant capacity will require the municipality to take on additional debt.

“As noted, costs for this project are significant and the current amount held in Development Charges is well less then what would be required to expand the plant. In this regard, any expansion to the plant would need to be fully funded from debt, with the costs (construction plus interest) being recovered through Development Charges (80%) and future user fees (20%),” staff advised Council. “When considering the use of debt, the Municipality must be aware of the impacts on our debt capacity, especially for a project of this scale. Currently our annual debt repayment limit sits at approximately $5.47M. This accounts for both existing and proposed debt as outlined in the 2021 budget documents. The remaining annual repayment limit is approximately $4M after removing existing debt, 2021 repayments for the Library and Thompson Street and 2022 repayments for the Nelson Street Booster Station and Gillies Bridge. This would allow the Municipality to borrow up to $60M at 4% over 25 years or $45M at 4% over 15 years.”