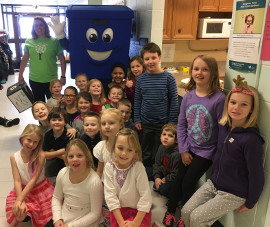 Earth Week was celebrated school-wide at St. Vincent Euphrasia Elementary school between April 18-21; for the students however, Earth Week is something to celebrate throughout the year.

Students were encouraged to show their love for our planet by wearing common nature colours. Tuesday was blue, Wednesday was green, Thursday was yellow, with a fun Rainbow Day on Friday. That was also the day of the annual Bruce Calvert Earth Day Hike-a-thon. This event is organized by the Grey Sauble Conservation Authority. Students collect pledges in advance of the day of the hike, with half of the proceeds donated to the school. The other half is used to help meet the Conservation Authority’s project goals. This year the students raised over $2,000! Kevin Bogle, a kindergarten student, raised over $311 while Richard Saunders, a Grade 1 student brought in $150.

The staff and students gathered after the Hike-a-thon for an assembly to honour the Earth. There was singing, dancing, and certificates were presented to the Green Team. Student volunteers work to collect the school’s recycling and compost throughout the year. You might think that students in Grades 1, 2, and 3 are not big enough or responsible enough for this task. You would be wrong! When the call went out for students to sign up, the library was packed with children wanting to help. Over the year, 59 students have served on one of the collection teams, giving up their recess once a week to work. Students were trained in how to sort their lunch waste and some students volunteered to stay at the waste area to help teach others about which bucket is the right one for their items.

The school has many partners in their commitment to being green. The Municipality of Meaford graciously partnered in the design of new vests and t-shirts for students to wear while they are working. The Green Team chose the design for the shirts too, and the shirts and vests were presented to the Green Team at one of the December assemblies. The students were excited when Big Blue helped make the presentations.

Madi Lewis, a Grade 11 student at Georgian Bay Community School, dedicated one of her Technical Studies projects to helping the Green Team at S.V.E. She reused some old stools to make compost bucket holders. These raise the buckets off of the floor and help hold the bags from slipping inside the bucket when items are added.

In the fall, students harvested vegetables such as potatoes, tomatoes, and pumpkins from their garden. Teachers incorporated this into their lessons in fun ways. For example, tomatoes were used to investigate symmetry, and then cooked into spaghetti sauce. Pumpkins became Jack o' lanterns but then were the subject of decomposition observations.

In October, a Grade 2 class organized and promoted Waste Free Lunch Week. They weighed each day’s lunch waste, and their results were sent into the annual Recycling Council of Ontario’s competition. Significant decreases in garbage and recycling were the results in all the teaching and advertising these students did. They are waiting for the announcement of this year’s competition winners.

The Nature Area is a popular 'outdoor classroom', as many classes visit the fenced-off sanctuary at the back of their playground. This year, two classes are participating in 'Forest School'. They travel to Beautiful Joe Park regularly to learn about animals and plants which they follow up back in the classroom. Kindergarten students can be heard exclaiming, “It’s outdoor learning time!” Physical Education classes are split between gymnasium use and outdoors.

May 18 was Outdoor Classroom Day, with many classes held outside. It has been proven that nature and green space impacts physical and mental health and well-being. Students at S.V.E. are reaping the benefits.