Young Talent Featured at GBCS Battle of The Bands 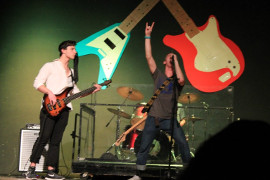 The Battle of The Bands at Georgian Bay Community School in Meaford on Friday night, March 3, showcased the talents of local high school students and provided many of them with their first practical lesson in performance as musicians.

This was the best attended of any of the bi-annual events so far, with close to 200 people in attendance, and it displayed a wide range of musical talents and styles. Thirteen bands competed, each of which received generous ovations and helpful comments from the judges.

The judges were: Chris Scerri, known for his promotion of live music in Meaford; Sylvie Kindree, member of The Kreuger Band; Ryan Hewgill, GBSS alumnus and multi-instrumentalist; Fran Bouwman, sculptor and creator of her alter-ego, Franny Wisp; and Drew McIvor, singer-songwriter. Head of the music department, Mr. (Patrick) Delaney, acted as the amiable and charismatic Master of Ceremonies. Another teacher, Mr. (Nick) Pretli, filled the role of bass player for many bands and even lent his name to the first band which kicked off the evening with a killer version of a Black Sabbath song.

Several students played in a number of different bands. One of the busiest musicians of the evening was Max Woodburn. He played drums for at least four bands with widely varying styles, in some cases without the opportunity of rehearsal. Bassist Cam Toth did the same. Each of them was acknowleged by the judges as the best in their field. The other winners in the outstanding instrumentalist category were Thomas Hebbert, who played keyboards for PJ and Marco, and Eden Young, who impressed the judges with her acoustic guitar playing for the band C.E.M.R. Michelle Wright won Top Vocalist honours for her impressive version of Adele’s Set Fire To The Rain. Although the judges could only choose one winner in each category they had special praise as well for Risa McEnaney’s drumming in C.E.M.R., and August Banks, whose hair-flinging stage presence added oomph to a rocking band called simply Band.

The evening started out with a very impressive video montage set to the Rocky theme. It had been created by Somer Graham as part of a contest held in the Graphic Arts class.

Musical selections, all covers, ranged across a variety of styles from headbangers to a simple and charming ukulele duet from The Outcasts doing a Grace Van Der Waal song. Three bands chose to do Adele songs, each in a distinctive style, including the only instrumental band of the evening featuring exchange student Pablo Pardavila on sax.

While the audience was enthusiastic about everything throughout the evening, the real purpose was to teach the students something about showmanship. It was in these areas, rather than specific playing, where the judges offered helpful tips. It was noted that some bands portrayed a real sense of being a band (“you looked like you just tumbled out of the van”), some were commended for dressing alike, and others were advised to make better use of the stage, or to invest themselves more in their delivery. There were repeated admonitions to play the drums with more power, but it was pretty clear that the subdued drumming was more a result of the sound mix than the players. The drum kit had been acoustically isolated behind Plexiglas panels to prevent leakage into the other microphones, but either it wasn’t sufficiently miked or it was mixed too low in the levels. This was particularly evident in the heavy metal selections which are designed to draw much of their power from their ability to rattle your spine.

Two bands took top honours for the night. A band that was originally billed as T.B.A. and changed their moniker to the much more interesting Trebellious won the audience choice award. The judges awarded top prize to Cry For Ophelia, a band that has been together long enough to have developed a really unified sound and good musicianship. In this band, Eden Young, who had already distinguished herself on guitar in an earlier band, showed her vocal skills fronting the band without an instrument. This band knew how to work a stage and make the most of their material. They had impressed audiences last summer as part of the Meaford Summer Concert Series in the town square.

Another band that had been part of that series but was not competing in this Battle of The Bands, was the Ted Brownlow Band. They played three or four songs after the competing bands to entertain the audience while the judges were backstage ruminating.

It was a celebratory night for both the bands and the audience. Aside from the performances themselves (which for the musicians probably whizzed by except when time stood still during technical glitches) the students learned about the camaraderie that comes from playing in a band. It is in many ways analogous to a sports team, in which every member has a part to play in order to win.

Mr. Delaney acknowledged the contributions of countless people behind the scenes to making the night a success. It is something that will long be remembered by everyone involved and, for some, it may have sparked an interest that will lead them toward a career.