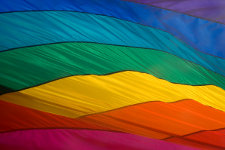 At the beginning of the week classrooms had activities for students to take part in to support the anti-homophobia initiative. One of those activities was to answer a questionnaire focused on sexuality, and some common questions heterosexuals have about other sexual orientations are asked in reverse.

“Straight people may ask ‘why are you gay?’ and that person responds ‘that’s the way I was born’ so we ask the students ‘why are you straight’ to give that sense that people who are not straight are the same as someone who is. They’re no different: they’re a person just like you,” explained GSA organizer Terry Best.

The GSA also had cookies with homophobic slurs and insults written on them for staff and students to take “a bite” out of homophobic bullying. They will have a banner for people to dip their hands in paint to place on banner to “lend a hand” then they will sign their name and leave a pledge of their support of anti-homophobia.

Rainbow wrist bands were for sale a dollar allowing students to express their support for the GSA, and against bullying at an assembly held on November 21.

The assembly included a video about a heterosexual girl who attends a homosexual school and gets bullied because she is straight. Best describes this to be a powerful visualization because it is heterosexual bullying compared to homophobic bullying.

Two guest speakers participated in the event. One speaker described his experiences in high school as a gay student. The other speaker talked about a brother who is gay, and the effects of homophobia and the impact anti-homophobia has in the community in terms of making someone with a different sexuality feel safe.

“It’s a week that the GSA will step forward to educate and illuminate the public with message that homophobia is not right. It needs to stop. Non-heterosexuals are people just the same as heterosexual people and we feel that this assembly and this week will really express that fact. We just need to ‘lend a hand’,” stated Best.