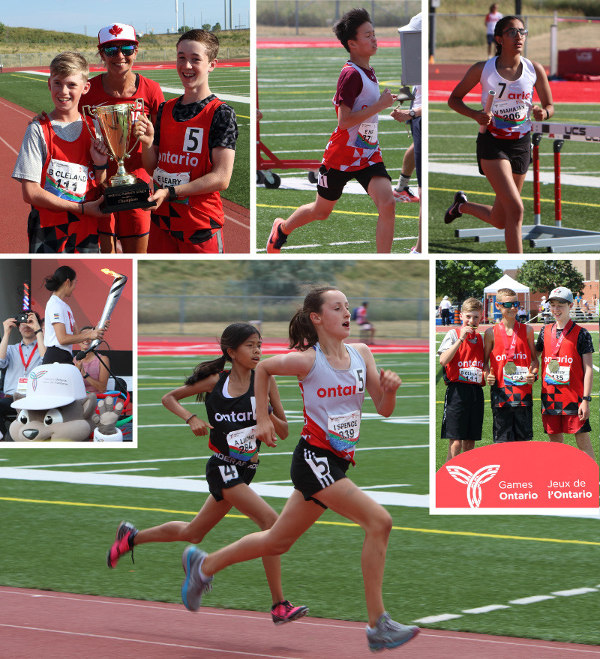 This past week the City of Mississauga was host to the Ontario Summer Games, the province’s largest multi-sport competition for athletes aged 12-18. The Summer Games are an initiative of the provincial government’s Ministry of Tourism, Culture and Sport.

This year was the 26th edition of the games, which have grown to include more than 3,500 athletes from across the province in 19 different sports, including baseball, basketball, lacrosse, volleyball, soccer, and athletics, to name a few.

Five members of the Georgian Bay Coyotes Track Club, Vani Mahajan, Ethan Mei, Emmett Leary, Isabel Spence, and Bryson Cleland were selected to participate in the sport of athletics as part of the group of 360 athletes who would get to compete in track and field. Each athlete was assigned to be part of one of four coloured teams which competed against each other for points based on their placing in their events, with the winning team getting to hoist the Ontario Summer Games Trophy. Each athlete spent three days with their team and team coaches which included numerous former Olympians, Canadian national team members, Canadian university track and field coaches, and current university student-athletes.

Athletes arrived at their venue on Thursday morning to meet their team and coaches. The evening was capped with the opening ceremonies at Toronto’s Celebration Square, where all 3,500 athletes, coaches, volunteers, and parents were welcomed by government officials and treated to the lighting of the torch and cauldron and some live music.

Early Friday morning the athletes were bussed to the track at St. Marcellinus Secondary School where the athletics competition took place. The school included an eight-lane 400m rubberized track and all the necessary elements for the field events, including two jump pits and designated fenced off areas for the throwing events. As a middle-distance track club, the five Coyote athletes were selected for the 800m, 1,200m and 2,000m running events.

On Friday morning, with the temperatures already hovering around 30oC the Coyotes took the track in their 1,200m races and showed that they were able to keep pace with the best in the province. Meaford’s Emmett Leary held the lead in the first heat of the boys U14 1200m but couldn’t quite hold on in the kick to the finish, placing second overall and earning a silver medal. Each Coyote gave their best effort and several achieved new personal best times along with their experience. Bryson Cleland and Isabel Spence finished in 16th in the U14 boys/girls respectively, Vani Mahajan was 17th in the U16 girls and Ethan Mei was 22nd in the boys U16 race.

Friday evening was capped off with the relay races where groups of four members of each team were selected to compete in either of the 4x100m or 4x800m relay. Isabel Spence was selected to be part of the 4x800m Team Grey ‘A’ team and she ran a strong middle leg to keep her team close with Team Grey finishing third and earning the Bronze medal. Bryson Cleland and Emmett Leary were selected as the third and anchor legs for the 4x800m Team Red ‘B’ team. After 1,600m on the track their team was in third place when Bryson took the baton from his teammate and started to make up ground. On his second lap of the track he passed his closest competitor to move his team into second position but well behind the Team Black ‘B’ team which was almost 100m ahead by this point. The final pass from Bryson to Emmett was a clean pass and Emmett took off like a shot trying to make up an almost impossible gap of approximately 100m with only 800m remaining in the race. Unofficially, Emmett ran his fastest 800m ever to pass his Black team opponent on the final lap and take the gold medal for the Red team. The Red Team manager said, “It was the highlight of the weekend to see Emmett passing the Black team runner like he was standing still.” In the U16 4x800m relays Vani’s team White ‘B’ finished fifth and Ethan’s team Grey ‘B” team also finished fifth.

Saturday was another blistering hot day on the track with temperatures reaching 33oC and warmer when standing on a rubber track. The day began with the U16 2,000m races. In the girls’ division, Vani ran a personal best time to capture ninth while Ethan Mei missed a new personal best time by less than a second, finishing 15th. By mid-afternoon with the sun at its peak the athletes took to the track for the 800m races. In the girls U14 Isabel Spence ran a great race and had an exciting sprint to the finish outpacing her fellow competitor and finishing 17th. In the boys U14 race, Emmett Leary again led the first heat right off the start but was outkicked in the final 100m of the race to finish second and claim his second silver medal. Bryson Cleland ran a very strong race, knocking six seconds of his previous best time and finishing 11th. In the U16 girls race Vani Mahajan finished 23rd.

With the competition winding down and teams desperately searching for additional points for their team to try to take the team title, club managers were asking athletes to compete in events for which they had never trained or raced. In the spirit of competition, Bryson Cleland, Emmett Leary, and Vani Mahajan took up the offer and were late additions to the 800m and 1,500m race walk. With last-second instructions from officials on proper technique for these events they were last-minute additions to the roster for these events.

Officials needed to be on their toes as they issued numerous infractions and several disqualifications in the race walk competition, but when all competitors crossed the finish line, unbelievably Bryson Cleland took the gold in the boys U14 800rW with teammate Emmett Leary claiming 3rd. In the girls U16 1500rW Vani Mahajan finished 5th. Based on their finishing position each of these athletes picked up valuable points for their team.

After all the racing was done, the scores were tabulated and only six points separated the top three teams. The Grey Team, which included Ethan Mei and Isabel Spence, finished third overall. The White Team, which included Vani Mahajan, finished second, just 4.5 points back from the winning Red Team which included Emmett Leary and Bryson Cleland, who got to hoist the Ontario Summer Games Trophy with their teammates and coaches and do a victory lap around the track.

Between July 21-23 these athletes had to endure relentless heat and time away from family and friends but received an experience of a lifetime getting to compete as part of Team Ontario and getting to meet like-minded athletes and making some lasting friendships which will continue at competitions yet to come.

“The five Georgian Bay Coyote athletes represented themselves, the club and community with humility, compassion, and a competitive spirit, and their coaches and parents are very proud of them,” said the team. “Overall they came away with seven championship medals and memories to last a lifetime.”

The team is now on a break but will resume training in August in preparation for Cross-Country season.