2009 A Year in Review- Part Two: Sights and Sounds of Summer 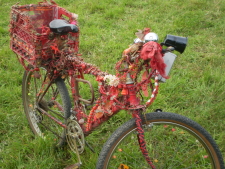 In part one of this three part series we explored some of the newsworthy issues and events that took place over the long, cold winter months that kicked off the year 2009.

Much of the focus was on Meaford Council and municipal finances. However, as the temperatures warmed, and green grass replaced snow covered ground, Meaford came alive with community spirit.

Before the joy of summer could take hold though, there was sadness in the community as we lost a true pioneer. David Harper, local elk farmer, and co-founder of the innovative local-food retail store The 100 Mile Market lost a very short battle with pancreatic cancer.

Townspeople rallied around in support of David's partner Barbara Kay, and honoured him with an emotional service at Meaford Hall, and later in the summer a maple tree was planted in his honour near the Rotary Pavilion where many in the community first came to know David Harper while visiting the Meaford Municipal Farmers' Market.

On May 11 Meaford Council finally passed the 2009 budget with the narrowest of margins. The hotly debated budget increased the overall property taxes by five percent, implemented the pay as you throw garbage bag tag program, and put in place a five year plan designed to eliminate the accumulated municipal deficits.

Councillors Gerald Shortt, Harley Greenfield, and Jim McPherson all voted against the budget, and Councillor McPherson expressed his feeling that the budget as passed would result in yet another municipal deficit.

Later in the month the Meaford Library kicked in to high gear with an application for grant funding in hopes of constructing a new library facility. The library board and staff appealed to Meaford residents to submit their 'visions' for a new library including preferred locations. Fund raising efforts were also initiated, and library spokespersons assured the public that no municipal funds would be used to construct a new building should the grant application prove successful.

There was much debate surrounding a later decision identifying Market Square as the location of choice. Concerns about downtown parking were high on the list of issues, however the municipality has stated that there are plans to address those issues should the project move forward.

Local farmers and food producers kicked off the third season of the Meaford Municipal Farmers' Market on the first Friday in June at the harbour Rotary Pavilion. The popular market continued for 19 weeks, ending the season on Thanksgiving weekend.

On the political front, debate about asphalt was at the forefront. Separate plans were proposed for paving both the parking area at the harbour pavilion, as well as parts of the Georgian Trail.

Neither plan moved forward. The proposed paving of the Georgian Trail failed to secure the required grant funding, and the desired paving of the pavilion area was thwarted due to soil contamination issues which must first be addressed before any development can be undertaken there.

In Meaford business news, June was the month that Evolve, an eco-friendly toy store opened for business on Sykes Street. The store owned by Sam McInnis specializes in toys made from environmentally friendly, and recycled materials, and offers an opportunity for eco-friendly parties and craft workshops.

Mayor Francis Richardson said of the new venture, “It is exactly what we need in Meaford. It is a niche market store with eco-friendly products. You can't get that in the 'Big Box' stores. It's something unique to draw people to our downtown.”

As June came to a close an improvement project at the Meaford Museum was completed and the ribbon was cut on a new vestibule. The addition, which was financed through fund raising efforts and an Ontario Trillium Foundation grant, made the building barrier free with the addition of electronically controlled doors which have become increasingly popular as modern construction has focused on building accessibility.

In addition to making the museum more accessible to visitors, the new entrance way will also make the building more energy efficient, and lower the heating and cooling costs, as the previous doors allowed for plenty of heat loss in the winter and conditioned air loss in the warmer months.

Meaford celebrated the birthday of Canada with a fabulous fireworks display presented by the local Kinsmen club.

A few days after Canada Day the ever popular Artfest by the Bay returned to Meaford attracting thousands of visitors and art enthusiasts to the harbour to take in the wonderful talents of local artists.

The major events kept coming as Wayne Gretzky and several of his sporting friends set up shop at both the Raven Club at Lora Bay, and the Georgian Bay Club in Clarksburg for Gretzky's annual golf tournament. The event attracted some of the most successful Canadian athletes of all time with former fastest man in the world Donovan Bailey, and Catriona Lemay Doan who at one time was the world's fastest woman on skates among the participants.

There was news aside from summer festivals and events in June. Late in the month the municipality announced that it had sold the historic 122 year old fire hall on Nelson Street to the Stanley Knight Heritage Society.

The Society plans on using the building to store documents and artifacts of historical significance, and will also hold meetings at the facility. In the agreement of purchase, they have committed to maintaining the structure as a Heritage Building.

Councilor Jim McPherson voted against approving the sale due to what he considered a very low purchase price of $120,000. McPherson stated that he was very pleased that the building is being sold, and he was in favour of the buyer and their intended use of the site, but he felt that the municipality did a poor job of maximizing revenue from this sale.

Perhaps one of the more unique and creative events in the municipality took place on a piece of land known as the “Funny Farm”.

For the fourth consecutive year Electric Eclectics provided an opportunity to experience some of the most fascinating sound and visual art to be found anywhere. Some of the biggest names in alternative sound were on the bill including the legendary Damo Suzuki, and Canadian band 'Holy Fuck'.

Hundreds of sound enthusiasts attended the weekend festival which in addition to sound and light shows offered visitors a chance to camp on the grounds and enjoy the majestic views from Scotch Mountain.

A sign that the summer was coming to an end, Sail Georgian Bay, Meaford's own sailing school closed their summer youth program in late August with an impressive Junior Regatta.

The sailing students were divided into teams and then put their skills to the test in some friendly competition.

The school has operated for more than nine years, and Director Rhoda Ironside expressed pride in the lessons that children learn by attending the Sail Georgian Bay program.

"These kids learn responsibility, they learn how to take care of equipment, they learn the importance of putting things away properly. Sailing lessons build character, and give kids an appreciation for personal safety, and team work,” said Ironside.

The joys of summer turned tragic late in the month when a series of storm systems moved through our area producing heavy rains and tornadoes. Neighbouring communities of Thornbury and Craigleith experienced tornado damage to apple orchards as well as residential properties. Georgian Peaks Ski Resort also suffered damage to buildings and property.

Meaford was spared the wrath of the tornadoes, however we didn't escape tragedy of our own. The heavy rains that accompanied the storms caused a drainage pipe on the roof of the library to back up and the building was flooded.

The extensive damage caused the library to be closed to the public for more than two months while repairs were made. Library staff and volunteers mobilized quickly to establish a temporary location where borrowed books could be returned, and a limited supply of materials was available for loan.

The library would re-open on November 3rd.

With September looming, the kids would soon be back to school, and the sights and sounds of summer would soon be memories as life returned to normal.

Check back tomorrow for the final part in this year in review series as we take a look at what the autumn months brought to the residents of Meaford, and we find out if the Bognor Bridge reconstruction would actually be completed on schedule.