Coyotes Back to the Races 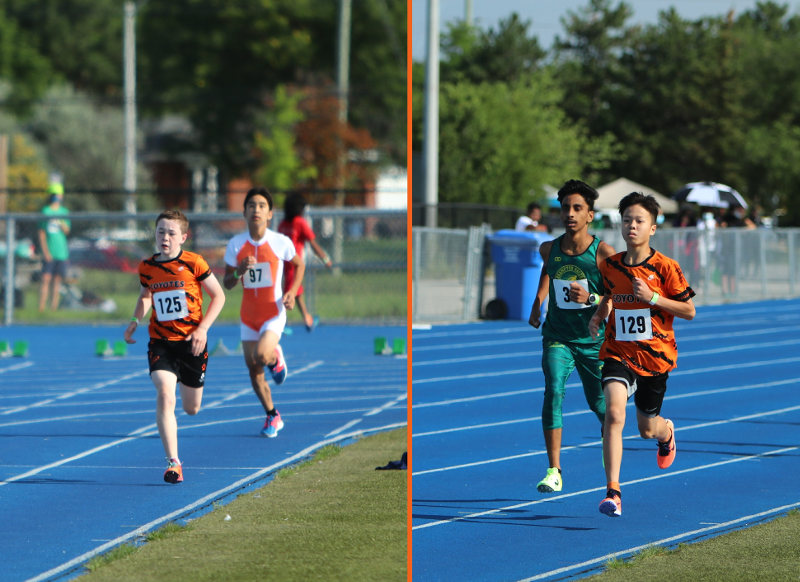 On Saturday, July 31, the Minor Track Association held its first track and field meet since February 2020 at the beautiful Terry Fox stadium in Brampton. The Georgian Bay Coyotes, along with numerous other Ontario clubs, were thrilled to be in attendance as almost 300 athletes from across the province participated.

In their first races in more than 18 months, the Coyotes certainly left their mark on the event. The first race of the day was the 1200m race which was confidently won by Emmett Leary as he stayed poised after falling behind several of the overly anxious runners in the first lap of the three-lap race. He slowly chipped away at the lead over several laps taking the lead for good with 200m left in the race to take gold and knocking 11 seconds off his personal best time.

Jacob Martindill, a Tyke, made his Coyote debut in this Atom race and he ran impressively against the older athletes. Sebastian Mei also put forth a solid run in this race, knocking an amazing 11 seconds off his previous personal best. The second race of the day was the 1500m. Again, the Coyotes left the spectators on their feet as Ethan Mei went out hard and held strong for the entire race, also taking gold and knocking a fantastic 15 seconds off his previous personal best.

The next Coyotes to line up on the track were Estella Mei and Jacob Martindill who competed in the Tyke 400m race. Estella started her race looking calm and collected and she poured on her speed in the last 200m while surprising her competition as she caught and passed a number of them, placing 5th. She improved her personal best time by over 8 seconds. Jacob followed Estella’s lead and took a calm approach to the beginning of his 400m race. He poured on the speed gradually and kept enough in the tank to finish sprinting, placing 3rd in his heat and 6th overall, and knocking 2 seconds off his already impressive personal best.

After a short break for lunch, the races continued with the 800m. Emmett Leary and Sebastian Mei ran in the Atom race while again improving their personal best times. Emmett stayed with the front pack of four runners and held on to place 3rd in the 800m race. The final race of the day for our Coyotes was run by Ethan Mei. He shaved more than 6 seconds off his previous best time and comfortably finished in 3rd place.

The team performed extremely well, setting personal best times in each and every race of the day. Some of the team is now on a two-week break before beginning training for cross-country season, while others, with the Outdoor Provincial Championships in sight, are training through the break and looking forward to racing again in early September.