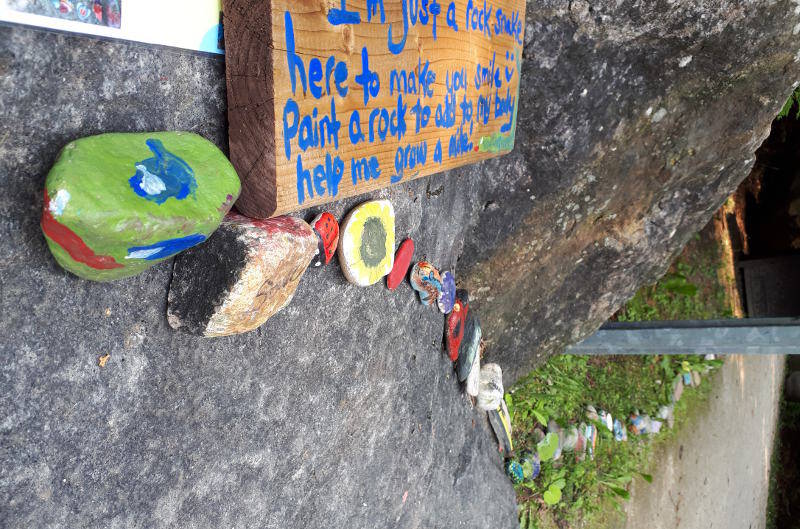 I think I’ve been living under a rock (pun intended) because I’ve only just learned about the ‘Meaford Rocks’ community event that has been sweeping the town. After a voicemail message from a local, I found out about the ‘Rock Snake’ on the Georgian Trail. I went to the Facebook page and was astounded to find over a year’s worth of posts about the wonderful rocks Meafordites have been painting and leaving out for others to find.

Since August 2019, the Meaford Rocks page has been a place to share joy and wonder as members of our community paint rocks and leave them around town for others to find. The goal of the project is to promote creativity, our community, and to just brighten someone’s day. And it’s simple to do. Find a rock, paint it, and leave it somewhere for someone else to find it! Once you find a painted rock you can keep it, re-hide it, or just enjoy its beauty. You can also share what you find on the Meaford Rocks Facebook page.

Another project that has been exciting many is the Rock Snake along the Georgian Trail near Montgomery Street. Cleighton Carbert, a local Meafordite, was inspired to begin the Rock Snake after reading Emma’s Gems during school, and hearing about another town that had a Rock Snake going. It began with four rocks and now has over one thousand. Daily, people are adding to the long line of painted rocks, inspired by the call to action. It has so entranced the community that someone began the snake’s ‘tail’ in Thornbury and they’re working backwards to reach Meaford.

On Thursday, July 22, Cleighton is being awarded the ‘Youth Spirit Award’ from Meaford Connections for “Contributions that have connected and involved residents of the Municipality of Meaford and surrounding areas in meaningful, positive and uplifting ways. That has inspired connections, new friendships, and lasting memories.” Come out to support Cleighton at 2 p.m. on the Georgian Trail at Montgomery Street for the award ceremony and see how much the snake has grown.