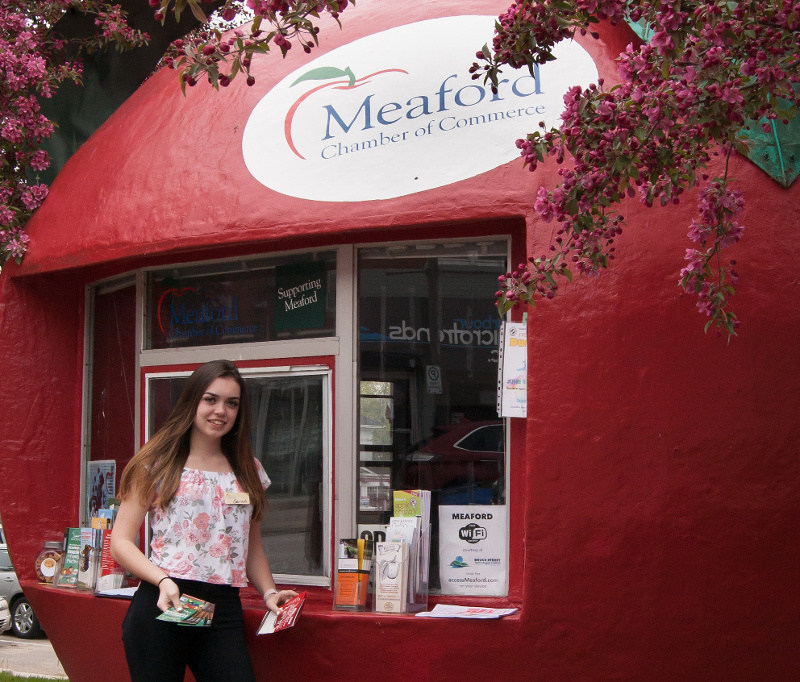 Meaford’s council has approved a request for an increase in funding provided to the Meaford Chamber of Commerce in exchange for operating the municipal tourist information initiatives out of the Big Apple on Sykes Street.

In a motion brought before council by Deputy Mayor Shirley Keaveney, an increase in funding was requested by the Chamber to assist with increased costs.

The motion approved by council will “direct staff to bring forward a report with an updated Memorandum of Understanding that includes an expiry date, a cost of living increase, sources of additional funding and other pertinent matters that staff consider necessary.”

Meaford CAO Rob Armstrong told The Independent that the proposed increase in funding would amount to approximately $500 annually, bringing the municipality’s financial support of the Chamber’s tourism and Big Apple initiatives to $8,500 in 2022.

Deputy Mayor Shirley Keaveney noted that in 2020 the Apple saw more than 13,000 visits from tourists seeking information. Though the number of visits dropped in 2021, with pandemic restrictions now lifting increased tourism can be expected as many Ontarians plan summer getaways.

Keaveney also noted that in spite of modern technology and access to a range of applications on smart phones, many visitors to a community want to speak with a person to ask questions and receive advice.

“People still like to ask somebody ‘where’s the best place to eat?’, they want to know what is the best of the best, if it’s a B&B they are looking for, they want to get recommendations from an individual,” suggested Keaveney.

Constructed in 1974, the Big Apple, the design of which was based on Leamington’s Big Tomato, has been a local icon for nearly 50 years. The structure’s primary use over the decades has been to promote the municipality’s tourist attractions and local businesses.

Over the past two years the Big Apple has undergone a restoration that has seen a new door and window installed along with a fresh coat of paint, insulation, and new cabinetry inside.

Meaford’s Chamber of Commerce staffs the Big Apple from July through October as a tourism and information booth, and the structure can also be rented by Chamber members for events and promotions.