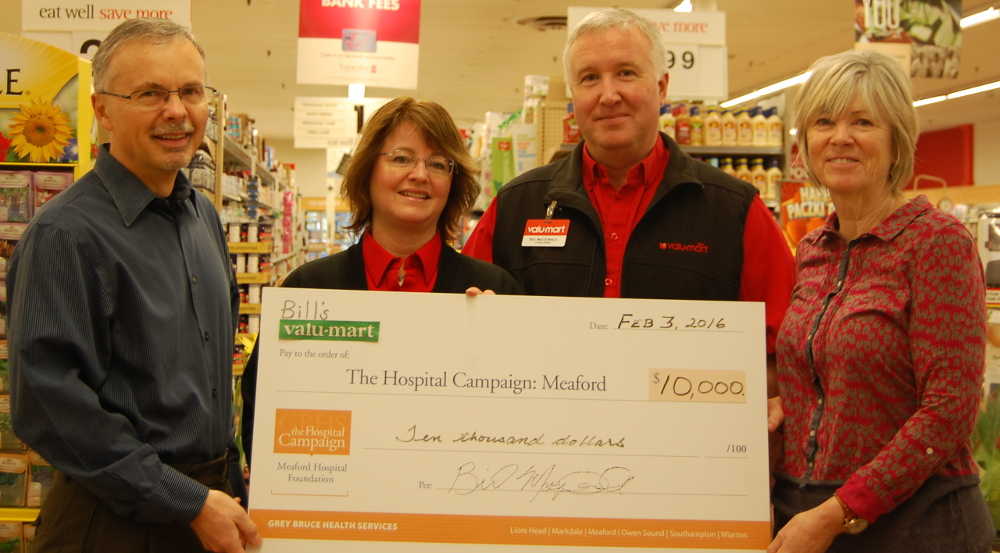 Bill and Barb MacDonald purchased the valu-mart franchise in the fall of 2003. They moved their young family to Meaford shortly afterwards, and were quickly absorbed into community life.

The MacDonalds chose Meaford for a number of reasons, “the size of the town, the location, being on the water, beautiful scenery, among other things,” said Bill.

“Our children grew up here. They were enrolled in school, with Elizabeth starting in Senior Kindergarten, Samuel in Grade Two, and Spencer in Grade Three.

“All of the children spent time working at the store, even before they were put on the payroll, helping with movie rentals, gathering shopping carts, stocking shelves and packaging local berries, before moving on to other departments, working as meat clerk, produce clerk, grocery clerk, cashier, and then on to the garden centre.

“The kids were heavily involved in local activities, from hockey and baseball to karate. They were involved in orchestra at school. They helped with our food drives at parades as well as at the store. They were part of our Great Canadian Shoreline clean-ups, and they participated in our fall fairs.”

Bill and Barb MacDonald’s support in the community has been much appreciated, according to Meaford’s former Head Scarecrow, Marilyn Morris. “As retired Head Scarecrow of the Meaford Scarecrow Invasion and Family Festival I have, the event has, and indeed our entire community has been witness to remarkable generosity and community spirit demonstrated by Bill and Barb MacDonald over the years,” she said. “Their store has not only been their customers’ social hub, but it has been a valuable and much appreciated support for local organizations and events. Rarely have folks representing a good cause been turned away when sponsorship of an event or a donation of product or funds has been solicited. And often the store itself has acted as a depot for community needs, such as service clubs, Meaford Hospital Foundation fundraisers, the food bank, and school breakfast club donations, and yes, even bins for gathering fashionable scarecrow clothing for the big fall event.

“It is no wonder that all the support and spirit demonstrated throughout the years has earned Bill and Barb and their staff the prestigious Chamber of Commerce Business of the Year Award, Customer Service Award, and Business Owners of the Year Award. All richly deserved!

“Bill and Barb and their family claimed Meaford when they took on valu-mart. The municipality and surrounding area was their home. Giving and giving back was natural. I simply want to thank them for caring!”

Seventeen years have passed quickly, according to Bill. “We have been incredibly blessed with our time here in Meaford,” he said. “The support from staff and friends and the community, the people we have come know and become close with, all have made for our time here to pass so quickly. It’s been a blur.

“The new owners are a great couple, and while I have only spent a short time with them, I know they will be a perfect fit in Meaford. Both Mike and Jody have been in the grocery business for many years and have earned this opportunity to own their own store. I know them to be pet lovers, and they spoke of how Beautiful Joe Park played a role in them choosing to come to Meaford. I trust that our amazing community will welcome them and support them as they settle into their new town.” 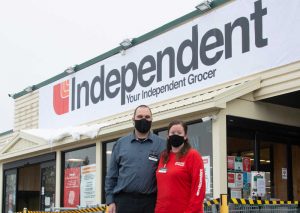 New franchise owners Mike and Jody Masse are offering every reassurance that despite a new sign over the door, nothing inside Meaford’s grocery store has changed. “It’s the same produce, same prices, and same customer service,” says Jody Masse who, with her husband Mike Masse, are the new franchise owners of what has been for the past 17 years Bill’s valu-mart.

On January 3, Bill and Barb MacDonald officially retired and Mike and Jody Masse assumed ownership. The grocery store will continue to operate as a Loblaw franchise but under the banner of Your Independent Grocer.

Mike and Jody arrived in Meaford mid-December from Exeter. Combined, they bring 32 years experience in the grocery business. Like the MacDonalds 17 years earlier, the Masses fell in love with the size of the community, its location near the water, and the scenery. As pet owners, they were intrigued with the concept of Beautiful Joe Park. “Meaford has a small town feel that is important to Mike and me,” Jody said, “and it is absolutely gorgeous down by the water.”

Bill MacDonald is confident that Mike and Jody will be a perfect fit in Meaford. “Both Mike and Jody have been in the grocery business for many years and have earned this opportunity to own their own store,” he said. “I trust that our amazing community will welcome them and support them as they settle into their new town.”

As owners of Bill’s valu-mart for the past 17 years, Bill and Barb MacDonald have been strong supporters of the community.