As the 20th anniversary of the 9/11 attacks approaches, the Beautiful Joe Heritage Society thought that now was an appropriate time to reach out to the community to remind them of one of our special monuments in Beautiful Joe Park at 162 Edwin Street. During our Sunny Sunday Tours of the Park in July and August, we have spoken to so many people who were amazed to hear the full story behind this unique monument within the historic park that celebrates the animal/human bond.

The 9/11 monument, created by the late Gunter Neumann, is made of two slabs of ledgerock representing the twin towers. The base of the monument is in the shape of the Pentagon, which was also attacked on that fateful day.

But why is this monument in Beautiful Joe Park in Meaford? Many of you will remember seeing the horrific pictures and footage of the rubble, and in those pictures were dogs – searching for life or remains, squeezing into spaces the human rescuers couldn’t, and still others were acting as therapy animals for the rescue teams that worked relentlessly in such overwhelming and emotionally-charged conditions. There were search and rescue dogs, cadaver dogs, therapy dogs, and sniffer dogs. The 9/11 Monument was erected for them. They went to work to try to find life – or, sadly, human remains that would bring closure to loved ones.

It was also erected to honour Sirius, the only canine officer to be killed when the towers fell. Sirius, a yellow Lab, was a bomb sniffer dog, Badge #17, working for the New Jersey – New York Port Authority. He and his partner, Officer David Lim, were in their office in the basement of the south tower, when they felt the impact as the plane hit. Before going to investigate, Officer Lim put Sirius in his kennel and promised to come back for him. David was injured when the building collapsed and was later found on the fourth floor and taken to hospital for treatment, and later released. Sirius was not so lucky. His remains were found in January 2002, and Officer Lim did indeed go back for him. Sirius’ body was removed from the wreckage with an American flag draped over him.

When it was decided to create the monument, the Beautiful Joe Heritage Society reached out to Officer Lim to discuss it, and then invited him to come to Meaford to unveil the monument in May 2002 – which he did. Lim, along with his boss, Inspector Gene Ceccarelli, brought the treasured cross that now is attached to the left portion of the monument. It was cut from a beam of the fallen New York World Trade Centre. Please note that another beam from the tower is located outside the Meaford Fire Hall in recognition of our local firefighters that went to Ground Zero.

We encourage you to visit Beautiful Joe Park, perhaps have a seat on Piper’s bench across from the 9/11 monument and reflect. Nearly 3,000 people died because of the attacks and over 300 dogs were deployed to help search.

This is just one of the stories you’ll hear when you take a tour through Beautiful Joe Park with us. 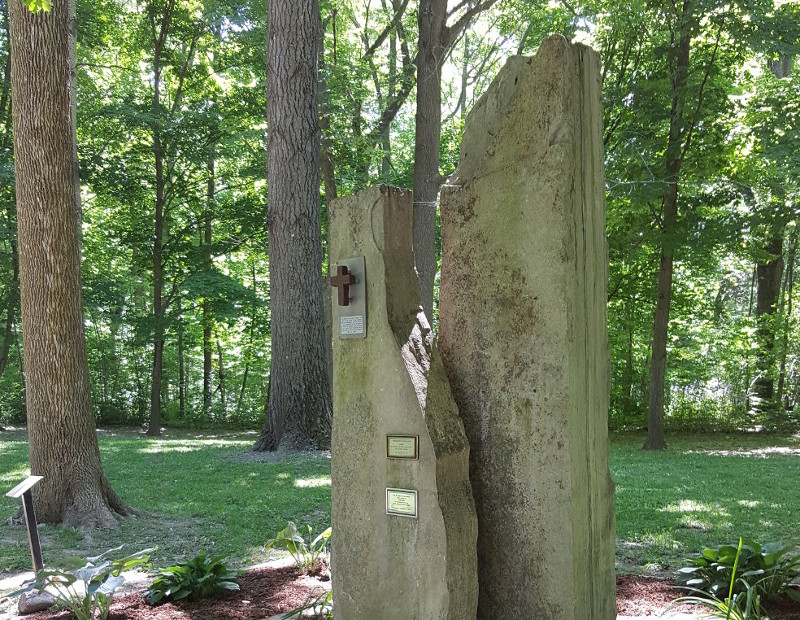