Arts In The Garden Takes Root 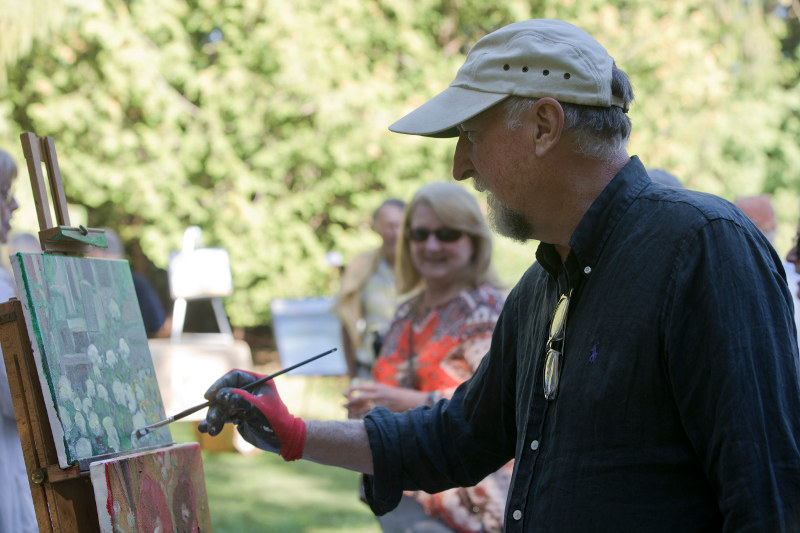 On Saturday, September 18, Meaford’s own Craig Gallery teamed up with Jen Burak, the new owner of historic 212 Miller Street (now The River House ) to host Arts in the Garden; a soiree that was attended by 80 people from the region, including Meaford’s Deputy Mayor, Shirley Keaveney.

This artsy afternoon saw the gardens transformed into a beautiful gallery. As guests browsed, renowned Canadian painter, Philip Craig, worked his magic at an easel beside the hollyhocks! It was a rare treat to see such a gifted artist in action.

Richard-Yves Sitoski, Owen Sound’s poet laureate treated the crowd to some stellar spoken word and the band, Miss Grundy, played a set of original tunes to entertain the crowd.

The sun was shining; it seems that Mother Nature was in full agreement with an event that both celebrated the arts and raised funds for two incredible organizations: the Meaford Culture Foundation (MCF) and the Women’s Centre of Grey Bruce.

Serving youth and women throughout the region, funds donated to the Women’s Centre will help with their much needed site renovations; specifically to support a new laundry room.

According to Angela Forder, the Foundation’s Community Outreach Director,this year the MCF has subsidized arts camps, funded the Meaford Singing Strings after school music program, and more. MCF also supports numerous local artists, festivals, and indigenous initiatives, as well as providing capital for Meaford Hall upgrades.These incredible programs are made possible by generous grants and donations, such as those recently raised at Arts in the Garden.

At the event, an original oil painting created on the spot by Philip Craig brought in a remarkable $1,000 for the Meaford Foundation’s Community Outreach initiatives.

The River House on Miller Street was all dressed up too; sporting her new copper turret and finial created by the Village Copper Company; a proud old girl indeed!

Arts in the Garden will be back in 2022 so if you missed it- stay tuned!