A Month of Remembrance at Meaford Hall 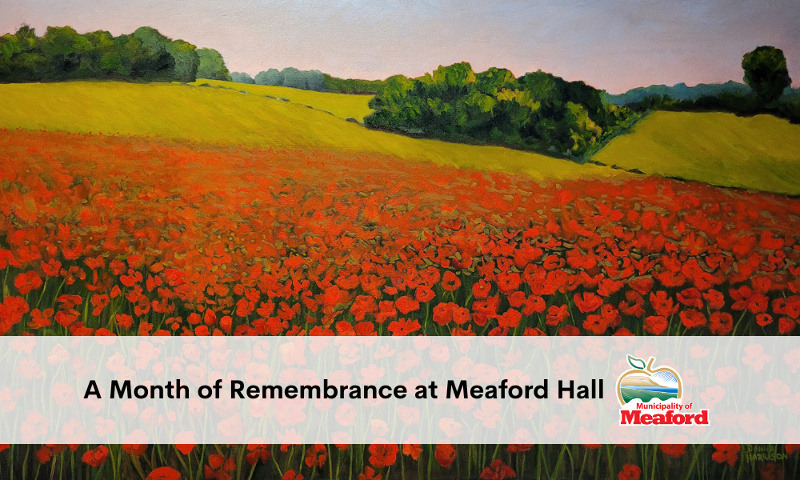 Meaford Remembers, a new exhibit on display in the Galleries at Meaford Hall, marks a labour of love and collaboration between several local organizations. It will serve as the backdrop to a number of special Remembrance-focused events in the month ahead.

Coming out of two years of COVID-19, Meaford Hall has had a very successful return to full programming and full houses since reopening in March 2022.

“Not only are concerts a staple of our programming but meaningful and educational performances, such as our upcoming Remembrance Day play, Jake’s Gift, are very important for community cultural development,” explained Krista Storey, Manager of Cultural Services for the Municipality of Meaford. “Including our school community in what we do here is very important and we’re pleased to offer a public performance on the evening of November 16 and a school performance on November 17.”

But the educational component doesn’t just take place in the theatre, according to Storey. To add further meaning to what is taking place on stage in honour of Remembrance Day, Cultural Services staff have been working diligently, resulting in a spectacular and poignant exhibit called Meaford Remembers in the Meaford Hall Galleries.

Inspired by the Poppy Project, a collaboration between the Meaford Museum and Royal Canadian Legion Branch 32 in celebration of their 95th anniversary, a public art initiative is on display, including handmade poppies which were created by members of the public. More than 500 poppies have been submitted and will be incorporated into the exhibit at Meaford Hall.

Meaford Museum staff have compiled the historic collection, with significant contributions from the Royal Canadian Legion Branch 32 Meaford and the 4th Canadian Division Training Centre (better known as, simply, “the Base”). The Meaford Public Library is hosting an author talk on Saturday, November 19, and has also contributed to the exhibit. Artwork by the Meaford Creative Arts Association is also on display, with each collaborator bringing their own unique touch. Special thanks are due to the Meaford Culture Foundation for a generous donation that has helped to make this project a reality.

Following the Remembrance Day parade and the laying of the wreaths at the Cenotaph on November 11, members of the public are invited to a reception and exhibit opening in the Meaford Hall Galleries from 11 a.m. to 2 p.m.

The Meaford Remembers exhibit will be on display until November 26.