A History of Meaford’s Big Apple 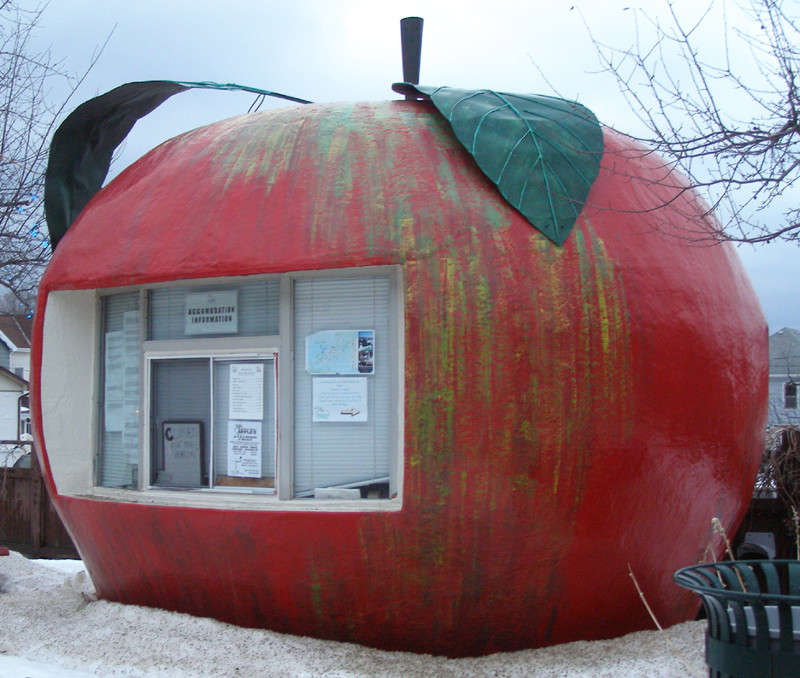 The Meaford Apple, also known as the Big Apple, has been an iconic local tourist spot for decades, welcoming thousands of out-of-towners annually for tourism information and souvenir photos. The Big Apple was built in 1974, after the Town of Meaford received generous funding from Globe Mills Limited. E.C. King Construction in Owen Sound donated the concrete slab to act as a base for building the apple, and Ormsby Concrete in Meaford donated a number of construction materials for the unique project.

This joint partnership was possible in part thanks to the Centennial Committee.

May the 29th of that year marked a historic milestone, as Noel Crawford, the Director of the Meaford Chamber of Commerce at the time, put in some elbow grease and helped with the pouring of the concrete base.

From there, the local Kinsmen volunteered the labour to build the 12-foot high, 15-foot diameter structure. In fact, the Kinsmen were the star of the show from start to finish, donating many materials for the project, drumming up support from local businesses, organizing and overseeing the building process, and even acquiring the necessary blueprints. The primary building materials for this project were fibreglass, donated by Amerock, as well as lumber donated by Knights. Bill Steward crafted the leaf on the top of the building out of metal from his metal shop.

Construction of the Big Apple was no easy feat. Back then, before the days where volunteers were turned away due to liability concerns, the Kinsmen and the Chamber were able to get quite creative. The lumber used to build the structure had to be bent to make the curved shape, and they had an ingenious solution for this: soaking it in a pool!

Mr. Crawford, owner of the Hilltop Hotel, donated the use of his swimming pool to soak and bend the wood. It had to be soaked overnight, with pool temperatures reaching as high as possible. That swimming pool is still in use today, and the motel is now operated by his son Randy Crawford.

The design plans for the Big Apple were created based on the design of the Leamington Big Tomato, built in 1961. The people of Leamington were happy to share their blueprints, and to this day still like to joke that they “had it first”.

The concept of the Big Apple originally came about as a partnership between the Municipality and the Chamber of Commerce, to fill a gap in municipal services. At the time, due to limited resources, the Municipality did not have a department in place to handle economic development and tourism. Their plan was to contract the Chamber for these services until being able to move them, bit by bit, to an in-house department.

At the peak of this contract, the Chamber of Commerce had five staff working full time to fulfill these much-needed services.

This was a controversial move, with Council being split on the decision.

In 2014, use of the apple as a tourism booth was threatened when the Chamber decided to put it up for sale, citing lack of purpose once the Municipality abruptly cut their contract.

There was quite a bit of interest from potential buyers, including the Municipality and local orchard owners. Many potential purchasers had plans to move the apple to a new location, too.

Thankfully, the Chamber of Commerce had a change of heart, and decided to use the Big Apple to promote local Chamber businesses moving forward.

Today, it is used as a seasonal information booth to promote local tourism and events. In 2019 the Big Apple saw just under 10,000 guests visiting from all over the country, including 36 visiting from other countries. In 2020, the number of visitors jumped to over 13,000! Considering the periodic restrictions caused by COVID-19 lockdowns, these numbers are quite impressive for our little town on Georgian Bay.

Of the visitors surveyed at the Big Apple over the last two years, the majority were in town for camping, farmers’ markets, fishing, trails, boating, motorcycle trips, beaches, and sightseeing. A surprisingly large number of tourists chose to visit Meaford as a day trip because of its dog-friendliness, too.

Over the years, the Big Apple has been a popular hub for events such as the Scarecrow Parade, the Santa Claus Parade, and downtown concert events in Market Square.

In 2019, the Big Apple received some much needed repairs. The restoration project was led by Scott Gooch of Bayview Escarpment Fine Furniture and Cabinetry, and current president of the Meaford Chamber of Commerce. Renovations included roof repairs, replacement of the air conditioner, and a brand new visitor window. Members of the Chamber Board of Directors volunteered to give the Big Apple’s exterior a fresh coat of paint as well.

So far in 2021 the Big Apple has received a new door, and will also see more improvements from the Kinsmen Club, including further exterior repairs and paint to the apple and the leaf. Thanks to Bruce Street Technologies, the Big Apple is also a community WiFi hotspot, as well.

Currently, the Chamber of Commerce staffs the Big Apple from July to October as a tourism and information booth, but also rents it out to local Chamber Members for events and promotions. Advertising packages are available for local businesses, and a sandwich board is also available to promote local events.

The Big Apple is currently listed on popular tourism sites, such as roadsideattractions.ca, bigthings.ca, roadarch.com, Foursquare City Guide, and other popular sites.