Council Hoping Chatsworth Will Change Position on Replacement of Bridges 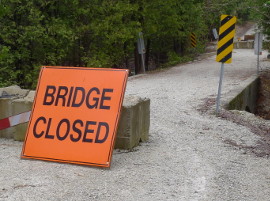 Armed with new information about replacement options and cost estimates, Meaford’s Council is hoping that the Township of Chatsworth’s Council will have a change of heart regarding the fate of two small bridges on the Holland- Sydenham Town Line between Grey Road 29 and the 2nd Concession South, which have been closed for more than four years.

In January of 2016, the Municipality of Meaford implemented the emergency closure of the bridges on the Holland-Sydenham Townline, due to the results of the Ontario Structural Inspection Manual (OSIM) and recommendations from Ainley and Associates Structural Engineers, which prepared Meaford’s State of the Infrastructure (SOTI) report for bridges in 2015.

A municipal class environmental assessment undertaken in September 2016 determined that the preferred solution was to remove the bridges permanently, a recommendation that frustrated area residents and farmers who rely on the bridges, and in the four years they have been closed have had to detour several kilometres around the closed bridges.

Over time came the realization that being on a boundary road, the bridges were not solely the responsibility of Meaford but also the Township of Chatsworth, and Council directed staff to develop a boundary road agreement with Chatsworth.

The Municipality entered into a boundary road agreement with the Township of Chatsworth in February of this year, and that agreement defines the process for agreeing to capital projects and the dispute resolution process.

Chatsworth’s unwillingness to engage in a new environmental assessment and ultimately share in the cost of replacing the bridges puts Meaford’s Council between a rock and a hard place, and staff advised that Meaford’s options are limited.

Council asked staff to prepare a report outlining the various types of bridge options along with estimated costs.

“The Municipality retained the services of R. J. Burnside and Associates Ltd. (Burnside) to complete an evaluation of bridge structures replacement options for Structures 21 and 22. As part of the evaluation Burnside examined nine different bridge types that would allow for both single and two lane bridge options. The purpose of the evaluation is to allow for the Municipality to have more information to evaluate if proceeding with the amended Class EA is the desired direction for Structure 21 and 22. If the decision is made to proceed with the Class EA process and amend the problem statement to remove the alternative of bridge closure then the Municipality will have to fund some form of bridge reconstruction. The Class EA and design process will utilize the information developed in the Burnside report along with consultation with agencies and site investigations to determine the preferred design for Structure 21 and 22,” staff advised Council at their November 2 meeting.

The report identified nine different bridge types with estimated costs provided for both single and double lane bridge replacements ranging from $894,850 to $2,094,000.

Given that Chatsworth has already indicated that they have no interest in partnering with Meaford to fund the replacement of the two bridges, staff recommended to Council on November 2 that Meaford enter into an arbitration process with Chatsworth.

Members of Council however, opted instead to request that Chatsworth reconsider their decision. This option provides the possibility for the bridges to be reconstructed and for the Township of Chatsworth to contribute to the construction costs without the need to proceed with arbitration.

Staff warned Council that requesting Chatsworth reconsider could be prolonging the process.

“This option would avoid the cost of arbitration if the change in decision is made however as per the notice received June 18, 2020, Chatsworth was clear that they are not interested in pursuing this option,” noted staff. “If this option is pursued and Chatsworth does not change their decision then it will prolong the process as Council will again need to make a decision between the other three available options. Due to the communication staff have received to date from Chatsworth this option is identified as not viable and therefore is not recommended at this time with the available information.”

Meaford’s Council is hoping that Chatsworth will change their position on the fate of the two bridges avoiding the need for arbitration.

Mayor Barb Clumpus agreed that arbitration should be avoided if at all possible.

“I am not in favour of arbitration,” Clumpus told Council. “Arbitration is a very harsh way to go forward with our neighbours and friends to the south of us, it would be good if we could come to an agreement without having to go the arbitration route.”

Should Chatsworth stand by its decision and be unwilling to partner with Meaford to fund the replacement of the bridges, Meaford’s options would be to fully fund the bridge replacement itself, or to permanently close and remove the bridges.