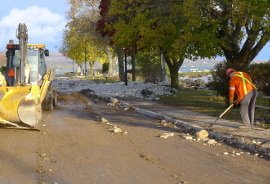 Strong November winds have once again pummelled Meaford’s shoreline, resulting in a significant amount of debris and rocks strewn across shoreline roads and greenspaces on Monday morning.

The municipality temporarily closed parts of Bayfield Street, Lakeside Avenue, and Aiken Street on Monday morning in order to allow municipal crews to clear the debris and to address minor flooding. Access to the three sections of road was restored by Monday afternoon.

Shoreline damage after windy periods are nothing new to Meaford. With the water level in Georgian Bay having been at near record highs in recent years, when combined with strong winds large waves have slowly eroded many shoreline areas.

Sunday night through Monday morning 50 kilometre per hour winds along with gusts of 80 kilometres per hour brought large waves crashing onto shore, carrying debris and undoing some of the recent work completed to address damage from previous wind events.

While earlier this year municipal staff had recommended to Council that the shoreline park areas be naturalized for the foreseeable future, many residents demanded that the parks be returned to their previous state with all amenities restored. Despite the risk of new wind storms undoing any work completed, in March of this year Council approved $80,000 in funding to rehabilitate both Fred Raper and David Johnston parks, along with green space along Bayfield Street. A tender was released on May 21, which resulted in two bids on the project, both hundreds of thousands of dollars more than Council had approved.

The two bids received were each initially in excess of $400,000, far more than the $80,000 Council had approved. Meaford Treasurer Darcy Chapman said during the July 13 council meeting that the $80,000 that had previously been approved would be used to fund the most critical rehabilitation work, leaving the remaining work to be done in the future.

That work was completed in August, and saw some 31 truckloads of washed-in sand, stone, and other debris removed from Fred Raper Park, restoring access to the beach area. A new electrical surface was installed to the washrooms to replace the damaged electrical line exposed by previous storms.

Any future funding for rehabilitation of Meaford shoreline park areas will be considered during Council’s 2021 budget deliberations, which are now underway.