2020 Apple Crop In Jeopardy Without Essential Workers On Farm 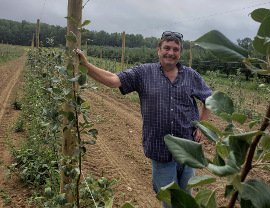 By Ontario standards, I have a relatively small apple orchard. I grow about a dozen different varieties on 25 acres of land that looks over beautiful Georgian Bay. Even on my small acreage though, my trees produce about half a million pounds of apples annually in an average year.

Each year, I’m assisted from spring to fall by two talented employees who travel to Canada from Jamaica through the Seasonal Agricultural Worker program. Another four employees travel here each fall to help with apple harvest.

Most are long-time employees; the longest has been working here for 31 seasons. And, due to the COVID-19 crisis, they haven’t been able to get to Canada. As a result, my orchard’s growing year – and my crop – are in jeopardy because of it. And thousands of other farmers across this province and country are in the same predicament.

Where possible, farmers like myself will hire local residents to help with the work but it’s important to recognize that farming is a complicated business and workers need to be highly experienced at what they do.

Our spring work includes planting a new crop of young trees and pruning the mature orchards. Apples are an annual crop and pruning of the trees (removing some branches) is critical to keeping them balanced and in good production. We also need to put in irrigation lines so that the trees we planted are kept appropriately watered through the season.

The federal government has verbally recognized the essential role that these workers play on Canadian farms. I also understand and appreciate that federal authorities are working to find a solution to this potential food security crisis but time is quickly running out with the growing season upon us. If fruit and vegetable farmers can’t get their spring work done, there won’t be a crop to harvest in the fall.

We also import about 80% of our food from the USA and beyond. Given that fruit-producing American states like Florida, Washington, and California are in the midst of the same pandemic and facing the same labour shortages as farmers here, it’s unlikely that imported crops would be able to fill the gap if we have a crop failure.

Nothing is more important than trying to protect the health and safety of all Canadians during these trying times. What we’re struggling with, though, are some of rules that officials want to put into place for these workers if they are able to find their way here – rules different than any other travelling Canadians who return home. Proposed protocols would have my employees isolated inside their housing units – not allowed to work for those first 14 days, even in self-isolation, and even if they feel healthy. My trees are planted in rows a minimum of 11 feet apart. It would be easy to divide the farm into isolation zones with the workers kept far apart. We hope that these type of amendments can be put in place to allow them to get here as soon as possible and begin working as soon as they do.

Without them, this growing year could be a disaster.

Brian Gilroy has been an apple grower near Meaford since 1987. He is also president of the Canadian Horticultural Council.