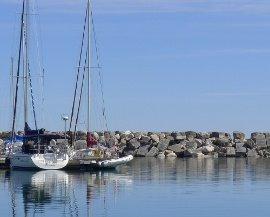 This week, the Government of Canada highlighted a series of investments made through the Department of Fisheries and Oceans’ Small Craft Harbour Program. Six of these investments will take place or have taken place in the riding of Bruce-Grey-Owen Sound.

The investments are as follows:

Rehabilitation of the breakwater that was damaged due to a storm event in 2017. Contract was awarded to Bronte Construction and work was completed in March 2019

Rehabilitation of the damaged breakwater. Contract was awarded to Bridge Excavating Ltd. and was completed in April 2019.

The Government also announced that projects will be taking place at Dyer’s Bay, White Cloud Island, and Howdenvale. These projects are still in the design phase and will soon be going to tender.

“The announcement today from the Government is largely a ‘re-announcement’ of completed projects,” said Larry Miller, Member of Parliament for Bruce-Grey-Owen Sound. “I am always pleased to see federal funding come to our riding. That is why when the Government told the Municipality of Meaford that funds would not be available to fix the breakwater after sustaining damage from the 2017 storm I pushed back to make sure that they held up their end of the deal. It’s also why I brought members of the Fisheries and Oceans Committee to Bruce-Grey-Owen Sound last year so they could see how vital these harbours are to the communities that use and depend on them.”