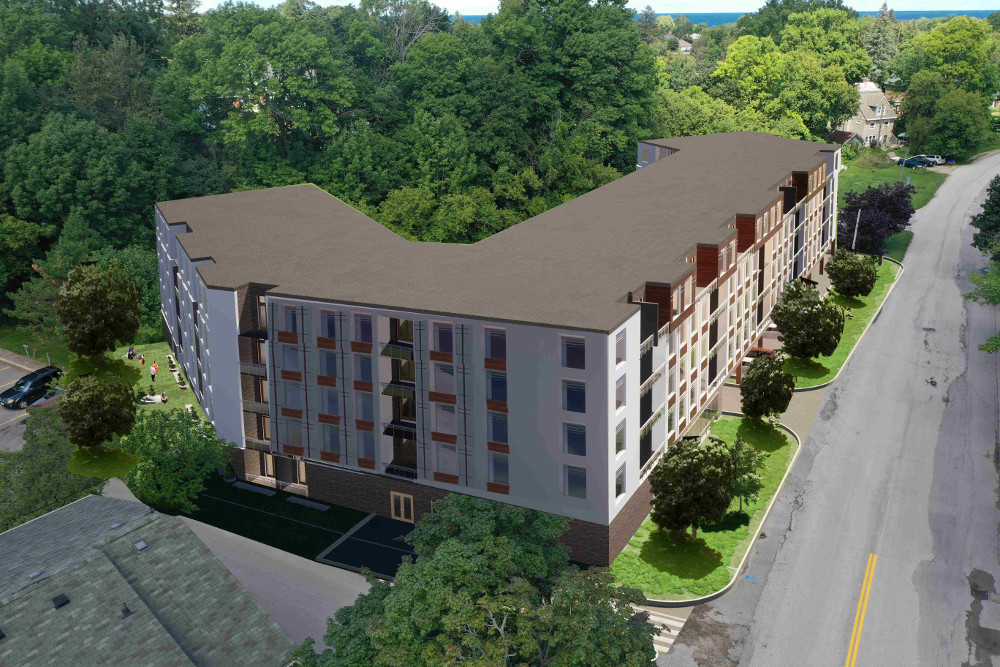 A developer is seeking a zoning amendment that would allow for a five storey residential condominium building on the former Legion property, located at 1 Legion Road. At a planning meeting held Monday evening (November 23) at Meaford Hall, Council heard from the proponent as well as from residents with concerns.

The proposed five storey condominium building, named Georgian Bay Terrace by the developer, would include 122 units along with 192 parking spaces both above and below ground. On their website (georgianbayterrace.com) the developer promotes the development as an investment opportunity.

“There are limited inventory of rental properties available in Meaford, hence there is a great opportunity for investors to purchase and rent units for a good monthly rental income. Busy all year round for Winter and Summer activities. Perfect for AirBNB and long term accommodation,” the website suggested prior to the Monday planning meeting. “A Great investment opportunity. Buy now while prices are low, starting from high $300s, for higher return upon completion in 2022.” As of Tuesday morning, references to the potential for units to be listed on AirBnB was removed from the website, and the starting price was adjusted from high $300,000s to ‘mid-$300s’.

Meaford CAO Rob Armstrong noted that comments had been received by some Meaford residents expressing concern about both the proposed height of the building, and the potential for increased traffic.

Representatives of the development, including property owner Kris Kornachi of River Manor Inc., Samuel Babs of Mississauga-based development firm AvranceCorp Development, planner Michael Barton, and architect Andre Sherman, shared their vision for the property with Council. Council was told that the developers have approached the Meaford Legion to discuss the potential for providing them meeting space in the new building once constructed.

Members of Council had a number of questions for the proponents.

The Deputy Mayor was curious to know why the proponents had established a sales office before receiving their requested zoning amendment. Council was told that the developer has not yet begun selling units, and that the sales office is for promotion and gauging interest in the proposed development.

Councillor Ross Kentner expressed concern that the developer is marketing the units as investment opportunity either for long-term rentals or Airbnb-style short term rentals. “How does that fit the concept of the type of housing we are trying to develop in Meaford?” Kentner asked.

Project representatives told Council that they appreciate the concerns about the potential for short term rentals, though they noted that developers have no control over units once sold. CAO Rob Armstrong advised Council that, under existing bylaws, short term rentals would not likely be permitted with this development.

“Under our zoning bylaw they (short term rentals) fall under the definition of what we call ‘cottage rentals’. Only where we have cottage rentals are you allowed to rent a dwelling up to three bedrooms,” Armstrong advised. “I believe it would not be permitted within this building.”

Armstrong told Council that he would confirm the eligibility for short term rentals at the proposed building in a report to Council.

The purpose of public planning meetings is for Council to receive input from a variety of stakeholders including from Meaford residents. No decision will be made until staff provides a report at a future meeting when the request for zoning amendment will be considered.