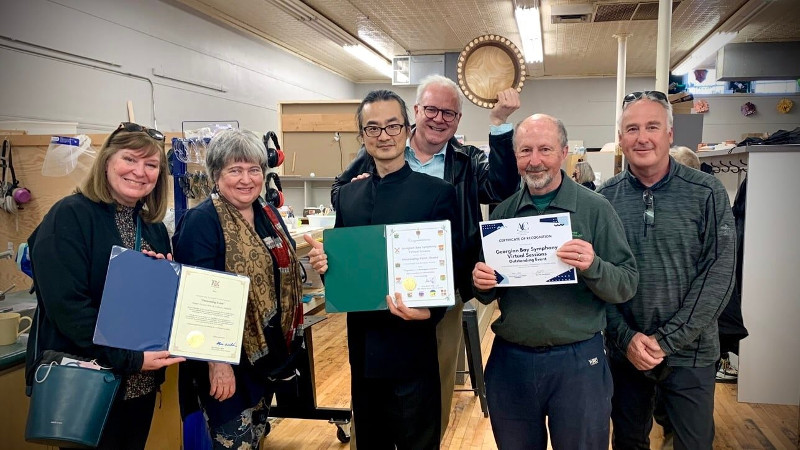 A big congratulations to everyone involved in supporting the music of the GBS! On Sunday, May 1, the Owen Sound Arts and Cultural Awards took place and the Georgian Bay Symphony was honoured with an Outstanding Event Award for Virtual Sessions.

During the pandemic, many community orchestras simply shut down or scaled back – but not the GBS. Determined to deliver music during trying times, Maestro Koh’s team of musicians practised in their homes, videotaped themselves, yelled at their iPhones, tried to get their hair to cooperate, recorded and re-recorded and then re-re-recorded themselves, submitting musical portions for audio mixing. It took a lot of work and was a new and challenging way to present concerts.

Each concert had a theme with visual elements to accompany the music. It was quite the labour of love, a technical feat that has been duly recognized. In fact, Meaford’s very own Victoria Yeh played a key role in creating the first series of virtual offerings.

Dr. Francois Koh, the artistic director of the GBS, was thrilled with the nomination and honoured to receive the award. He attended the event along with orchestra manager David Adair, board members Alisa and Vince Van Alphen, clarinetist John Dickson, and oboe player Claire Baker.

The orchestra finally made the move from virtual to in-person concerts in December 2021. A brief shut down in February due to the Omicron spread, the first live concert of 2022 was on March 26.

Firmly back in the saddle, on Saturday, May 7, the GBS rode again to play at the Harmony Center in Owen Sound. Well known Canadian solo violinist Mark Fewer joined the orchestra to welcome spring, playing the lyrical Lark Ascending by Ralph Vaughan Williams. Also on the program was a symphony by Dvorak and two selections by modern Canadian composers Gary Kulesha and Larysa Kuzmenko.

The final GBS concert of the season is on June 18, and is a celebration of all things Beethoven. Don’t miss out! Visit georgianbaysymphony.ca for tickets and information. After all, everyone could use little musical escape; it’s food for the soul and your chance to support regional arts and culture in person this time!