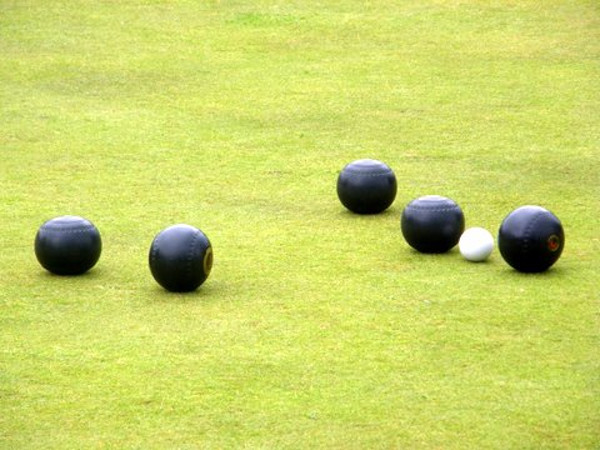 Although rain postponed a few of their events this summer, the Meaford Lawn Bowling Club was able to hold an in-house tournament on August 31.

The tournament trophy was sponsored by the Grierson family in memory of the late Jim Grierson, a long-time club member.

Twenty bowlers played three 10-end games to determine a winner. Lawn bowling can be played as singles, doubles, and trebles and with men only, women only, and mixed. Wednesday’s tournament was mixed doubles with each of the two team members throwing four bowls. There were a couple of rule changes thrown in to make things fun and challenging.  Players were required to play with their non-dominant hand for an end and skips and leads traded places for an end.

In addition to her role as convener and scorekeeper, Joan Grierson made the presentations on behalf of her family. Dan Dekking and Carol Carlson paired up to win the tournament. Second place went to Bill Bouwman with team members Jeanne Burch and Paul Warwick alternating games in the lead position. The third prize was won by Jim Hamill and Carol Robson. Rea Best and Maureena Boutari were fourth and Jill Calvert-Goetz and Maureen Knight placed fifth. The sportsmanship award went to Mark Sandell and Sue Singleton.

Evening and morning lawn bowling sessions continue into September until the 22nd with one more tournament to be held on September 15. For details, check out their Facebook page: https://www.facebook.com/meafordlawnbowlingclub and their web page www.meafordlawnbowling.ca for information.