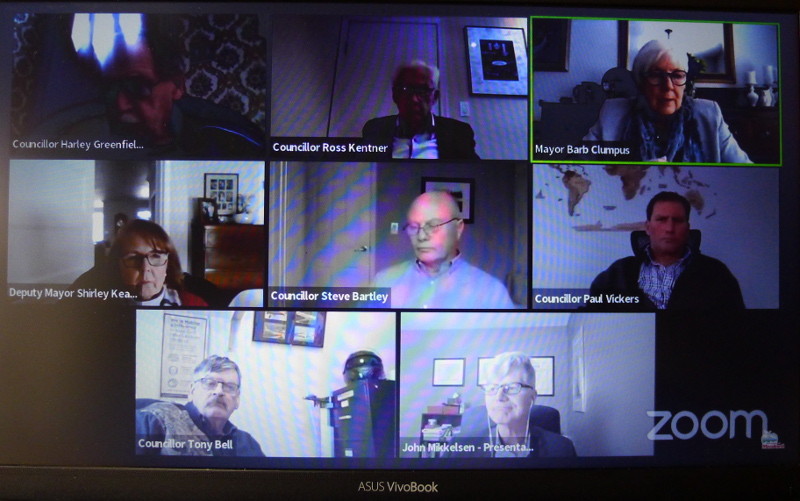 TC Energy, the proponent of a hydroelectric pumped storage facility to be located at the 4th Canadian Division Training Centre lands in Meaford, provided an update to Meaford’s Council during their January 31 meeting.

John Mikkelsen, TC Energy’s Director of Power Business Development, told Council that his team, now operating under the ‘Ontario Pumped Storage’ moniker, has been listening to the concerns expressed by Meaford residents about the project, and he provided new conceptual drawings to Council depicting the overall site design for the project as well as some details about the underwater inlets and outlets.

The concerns of opponents are many, ranging from fears that the facility would have negative impacts on the environment, including negatively impacting fish in the bay, to concerns that homeowners in close proximity to the site could be in danger of flooding should the reservoir fail.

TC Energy, on the other hand, says the proposal is a green initiative that would consume inexpensive off-peak power at night to pump water from Georgian Bay into a 374-acre storage reservoir located 150 metres above the Georgian Bay shoreline on the military base. The reservoir, which would hold 20 million cubic metres of water, would be emptied back into Georgian Bay during peak usage periods, driving hydraulic turbines to generate electricity.

Prior to Monday’s council meeting, Mikkelsen had previously highlighted a number of design changes announced last summer as evidence that TC Energy is listening to the concerns expressed by residents, and two key changes have been incorporated into the new designs. TC Energy said that the power house has been moved away from the shoreline and will be buried in a cavern. The water intake and outfall has been moved away from the shoreline into deep water, which TC Energy says will avoid sensitive near-shore fish habitat. Additionally, the proponent has committed to sub-sea transmission lines as opposed to over-land transmission lines.

At Council’s January 31 meeting Mikkelsen provided drawings in order to help members of Council and the public visualize the proposed facility. 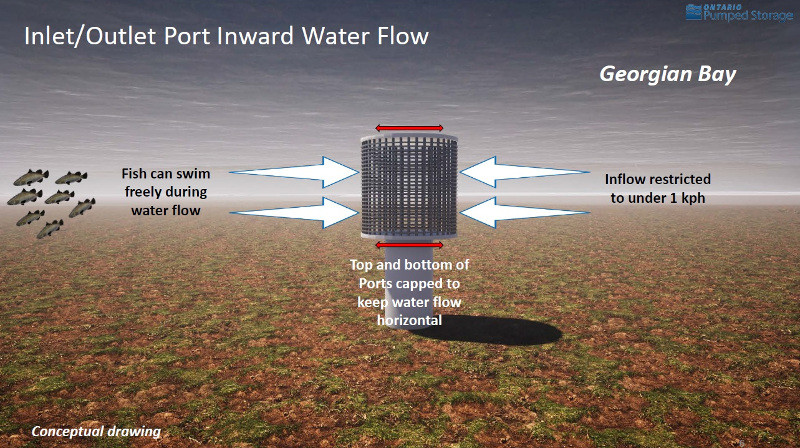 He suggested that the inlet/outlet ports are being designed to ensure that they won’t be a danger to fish, noting that the rate of water flow would be limited to under one kilometre per hour, posing no danger to aquatic life.

“This project, if developed, would be an important contributor to achieving a zero emission electricity system,” Mikkelsen told Council during their January 31 virtual meeting. “We have listened, we have made changes, and we are committed to protecting Georgian Bay.”

Originally estimated to cost $3.3 billion, the changes made to the project, largely in response to public concerns, has added more than a billion dollars to the cost of the project.

Mikkelsen noted that the design of the facility has been altered in order to conceal the facility from view, and to ensure that concerns about water turbidity and danger to aquatic life aren’t realized.

“We have heard concerns about fish, and fish habitat, so we have relocated the intake and outlet from the shoreline to deep water where we expect less fish habitat,” he explained.

He advised Council that water would be pumped at low velocity to the newly designed inlet and outlet ports, ensuring that aquatic life is not impacted.

“I’m very excited about this innovative component and its potential to protect the aquatic environment of Georgian Bay”, Mikkelsen told Council.

He explained that 20 inlet/outlet ports would be placed in deep water off the lake bed, well below the surface and shrouded with screens to ensure that fish don’t enter the ports. The speed of water flow at less than one kilometre per hour has been designed to ensure that fish are able to swim away from the ports according to Mikkelsen.

In June of last year the Ontario Clean Air Alliance (OCAA) weighed in on the proposed pumped storage facility on Meaford’s Tank Range. In a press release issued on June 16, the OCAA suggested that there are better alternatives than are found in the proposal put forward by TC Energy.

“The Ontario Clean Air Alliance (OCAA), an organization that led the successful campaign to phase out Ontario’s five coal-fired power plants, and are now working to move Ontario towards a 100% renewable future, are proposing a cost-effective alternative to the proposed TC Energy Corporation (formerly TransCanada Pipeline) project for a pumped storage plant (PSP) on the shore of Georgian Bay,” the organization explained in the press release. “The OCAA proposes an alternative that would benefit the Ontario ratepayer by reducing the cost by 98% of the TC Energy proposal.”

The OCAA however suggests a different approach.

“TC Energy is seeking a contract from the Government of Ontario to finance the construction of its Georgian Bay PSP. The proposed PSP will pump 20 million cubic meters of water from the Georgian Bay at night to a 375-acre man-made reservoir in the Niagara Escarpment, and release it back into the bay during the day to generate electricity. The plant will use 30 percent more energy than it generates when it pumps water to the upper reservoir, generating only 1,000 megawatts of power while consuming 1,250 megawatts,” the OCAA suggested.

The OCAA has proposed extending transmission lines to use water power from Quebec during Ontario’s peak demand instead.

“Hydro One could upgrade its transmission system to allow us to import an additional 2,000 megawatts of peak Quebec water power at a cost of only approximately $80 million. Quebec could provide us with twice as much peak power as the TC Energy project at a capital cost that is 98.14 percent lower,” said Jack Gibbons, Chair, OCAA. “According to TC Energy, the PSP is the ‘most proven, economical’ way to provide us with 1,000 megawatts of peak power to help phase out Ontario’s gas-fired power plants. This is simply not true,” added Gibbons.

In the summer of 2021 the DND approved the project moving forward on its land. On July 28 the DND issued a statement regarding the proposed pumped storage facility.

“The Department of National Defence has signed an Agreement in Principle with TC Energy that will see the company advance to an Impact Assessment for a proposed hydroelectric pumped-storage facility at 4th Canadian Division Training Centre Meaford (4 CDTC),” the DND advised. “This Agreement in Principle provides that the project could operationally co-exist at 4 CDTC if it does not impact military activities and training. It is anticipated that TC Energy will soon pursue additional Impact Assessment and Environmental Assessment processes with both the federal and provincial governments. Should these assessments be positive, TC Energy may then seek a licence for the project under the Dominion Water Power Act (DWPA). The DWPA requires that the land remain Crown property. Importantly, the Agreement in Principle confirms that the project will not move forward unless all necessary provincial and federal assessments are completed, including required regulatory approvals, and mitigation is in place for possible impacts to planned and future operations and training capabilities at 4 CDTC Meaford.”

While the DND has given the green light, with conditions, to the proposed facility being developed on its land, there has not yet been any agreement with the Saugeen Ojibway Nation, which TC Energy says must offer their approval before the project would move forward.

Though members of Council did not pose any questions to Mikkelsen at the conclusion of his January 31 update presentation, Mayor Barb Clumpus thanked him for the update.

“We too are very very anxious to learn more about the environmental assessments and studies that you are going to be involved with, but in the meantime we certainly appreciate your attempts to keep us informed as to the progress and the state of your project,” Clumpus told Mikkelsen. “Your concern with Georgian Bay and environmental issues of course mirror our own.”