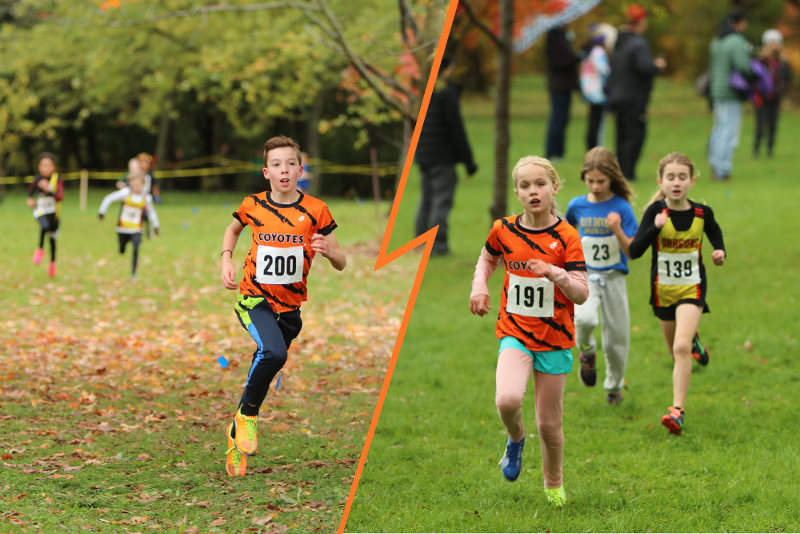 The Georgian Bay Coyotes attended the meet with a roster of 21 athletes. The morning started with drizzle, and the course was wet and muddy from the heavy rains the night before. There were rolling hills for the athletes to contend with, though the team was well prepared to tackle hills.

The Coyotes had an exciting start to the day as Alba Hargreaves paced herself well and crossed the line in third position, winning the Provincial bronze medal. Next, the Mite boys followed this up with an 8th place finish by Caleb Cleland. The Tyke boys had a team of three runners who showed up prepared to give it their all. Jacob Martindill placed 5th while Liam MacInnes-Wiley pushed hard to cross the line in 12th, and Nathan Leary was close behind, crossing in 15th position.

The biggest race of the day saw over 65 Atom girls line up to race. The Coyotes had seven runners in this race, most of whom were first year in the age group. They paced themselves very well off the start, and they ran the majority of the race as a pack, placing about two-thirds of the way through the group of 65. The Atom boys had over 50 competitors in their race, and the three Coyotes in this race had some exciting finishes. When the starting gun fired, Emmett Leary was swallowed up in the mass start, but managed to pick his way through his competitors and he finished in third place, bringing home another Provincial medal for the team. Bryson Cleland put forth an incredible sprint to finish off his race, capturing 33rd place.

The last Coyote to lace up was Jack Wessinger and he raced in the senior boys category. He was calm and collected as he tackled his 3km course and placed himself in the top 15.

“Our Coyote runners put their training to the test and proved that all their hard work paid off. Coach Steve Leary is very proud of all these young runners, most of whom are new to the sport, and he is looking forward to continuing to train with this energetic and dedicated group,” said team organizers.

The team now has one more week of training before they take a well-deserved two-week break. If you would like to find out more about the team, please check out their website at: www.georgianbaycoyotes.com