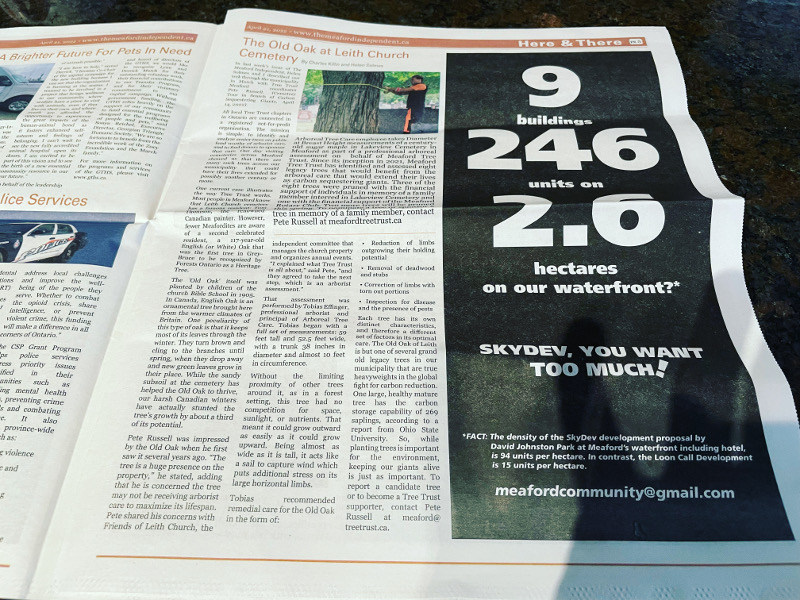 A group of residents dubbed Meaford Community want to let SkyDev know through an ad campaign that their proposed development at the waterfront has abandoned the governing principles of Meaford’s Official Plan. The requirements for density, height of buildings, massing, open space, compatibility, parking, and pedestrian-oriented environment have been ignored.

Linda Fleming-MacInnes, a long time Meaford resident, noted that, “Skydev appears to have a deaf ear and un-sharpened pencil as far as their conversation with our town of Meaford continues.”

After hundreds of letters and deputations later, as well as an art exhibition to build awareness about the implications of the proposed development, the proposal remains untenable to residents who live near and far from the site.

Meaford resident Cindy Slee said that, “The Official Plan states that development will not cause or create traffic hazards or an unacceptable level of congestion on surrounding roads. As well, the Official Plan states that Council shall be satisfied that a development proposal respects the character of adjacent residential neighbourhoods in terms of height, bulk and mass. The Sky Dev proposal does not satisfy either requirement.”

To raise awareness and to bring this issue to the forefront, a bold ad campaign has been created by Pamella Branch and Reet McGovern of R&P artwork. Four ‘awareness ads’ have been placed in The Meaford Independent with funds raised by the people of Meaford.

One of the many casualties of the plan is that six hundred and eight trees would be destroyed to be replaced by a hotel and a loading dock. “I am concerned that a loading dock is planned right next to the pedestrian route to the waterfront beach by David Johnston Park and the Reef Boat Club,” said Sue Johnston. “That is a dangerous combination.”

The waterfront property is designated Special Policy Area #1 with the goal of creating a pedestrian oriented, mixed-use area.

Ros Rossetti maintained that, “A rare opportunity to create an extension to our publicly accessible, tourist-attracting waterfront is in jeopardy because of the SkyDev proposal. SkyDev could have demonstrated due consideration for the terms of our Official Plan by submitting a proposal that balanced built development with a pedestrian-oriented waterfront park. Instead, SkyDev continues to push for a very high density development completely out of character with the local environment.”

“Meaford Community wonders how many other small towns are being catapulted into cityscapes? How many other towns will have to deal with the massive increase in density, and resulting congestion? The Ontario Housing Task Force advocates “gentle density”, not a tsunami of buildings,” said the group.

As a result, the Meaford Community is compelled to speak up for positive, livable communities. As resident Viv Grant declared, “Let’s not trade in our small town charm!”