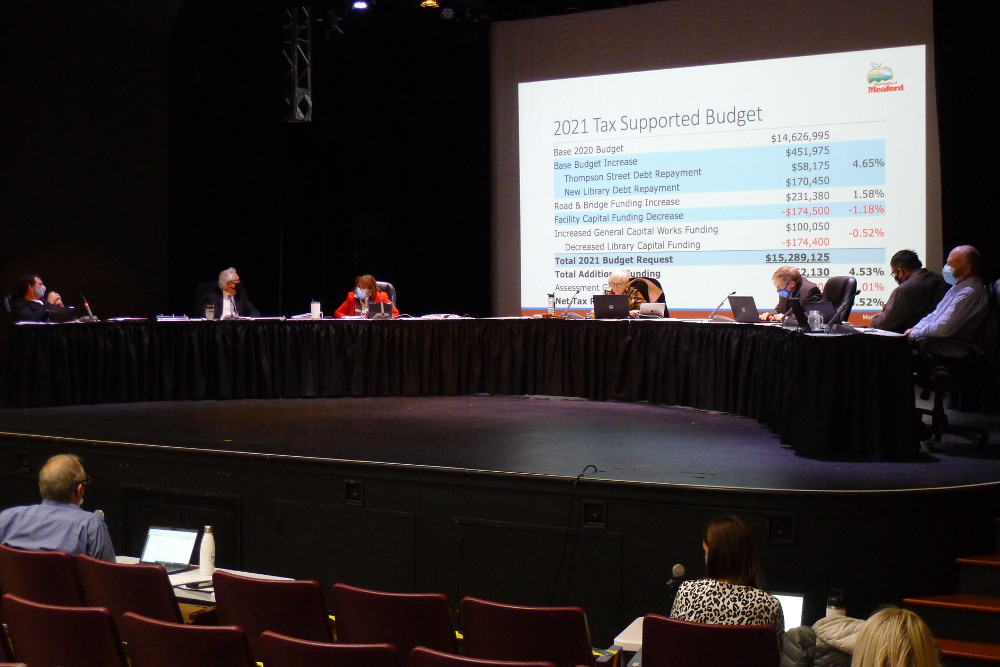 At their November 30 meeting, Meaford’s Council made some more adjustments to the 2021 budgets that have resulted in the required rate increase in 2021 of 3.43 percent, down from 8.7 percent at the beginning of the budget process.

After two full days of budget deliberations on November 9 and 10, Council had made some changes that would see the required rate increase in 2021 drop from 8.7 percent to roughly 5.14 percent. Some minor adjustments on November 30, along with factoring anticipated assessment growth in 2021 has seen the required increase decreased to 3.43 percent.

The impact of these items alone on the 2021 municipal budget is $564,150. With the annual increases to infrastructure funding of one percent for roads, one percent for bridges, and half a percent for municipal facilities, the proposed 8.7 percent increase would have cost the average residential property owner an extra $188 in 2021, or $15.70 per month.

In their effort to reduce the required rate increase in 2021, Council has directed staff to increase the cost of bag tags for trash disposal from $3 to $4, a move that will provide roughly $60,000 in increased revenue in 2021, and those savings will help offset the significant increase to the municipality’s waste management contract beginning next year.

Council also decided to reduce the proposed $100,000 funding to the Fire Apparatus Reserve to just $40,000, saving another $60,000. Savings were found in the capital budget for Lakeview Cemetery, with Council reducing the funding for two new columbarium niches to one, saving another $30,000, a decision that was reversed at Council’s November 30 meeting.

While the staff cost of living adjustment (COLA) had been pegged at one percent, with the savings realized Councillor Steve Bartley suggested increasing the COLA increase to 1.4 percent, which would match increases in neighbouring communities and at the county level. Bartley noted that Council’s intention has been for Meaford’s staff COLA increases to keep pace with but not exceed increases in neighbouring municipalities.

A statutory public meeting will be held on Monday, December 14, with Council expected to give final approval to the 2021 budgets at their January 11, 2021 meeting.

All questions about the budget from Council and the public can be sent to budgets@Meaford.ca.