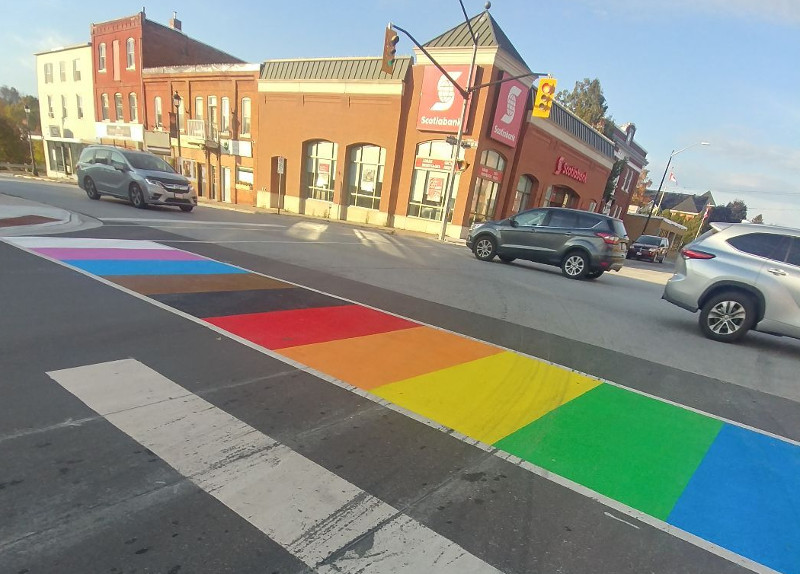 After a delay caused by rain, the Municipality of Meaford has completed the rainbow crosswalk at the intersection of Trowbridge and Sykes Streets.

The crosswalk was painted on Tuesday, October 19, and was dry and ready for pedestrian and motor traffic by late afternoon.

“The Municipality of Meaford Council and staff are committed to an ever-increasing pathway to inclusion. Keep your eyes peeled for this beautiful new crosswalk that will include the 11 colours identified in the Progress Pride Flag representing LGBTQ+ people of colour and the trans community. The crosswalk will be a lasting symbol of how our municipality supports a diverse and inclusive community,” the Municipality noted in a press release announcing the pending installation.

In recent months a number of local municipalities have adopted rainbow crosswalks, including Owen Sound and Collingwood.

Council approved a staff report and recommendation for the crosswalk at their September 13 meeting.

In a report to Council, municipal staff advised that with the current reconstruction of Trowbridge Street, it is an opportune time for such an installation.

“The Municipality of Meaford is commencing the reconstruction of the Trowbridge Parking Lot and resurfacing of Trowbridge Street from Sykes to Bayfield Street. This project will also include accessible parking on Trowbridge at the library,” staff advised. “Staff are aware that many municipalities are establishing Progress Pride Flag Rainbow Crosswalks and consider this to be the ideal opportunity to establish same in Meaford based on the reconstruction. The proposed Rainbow Crosswalk would be located on the eastern portion of the intersection of Sykes and Trowbridge Streets.”

The work was completed as part of this year’s municipal line painting contract and the estimated $8,500 cost will be funded by the 2021 contracted services operating budget.

A ribbon cutting ceremony celebrating the crosswalk will be held in the coming days.