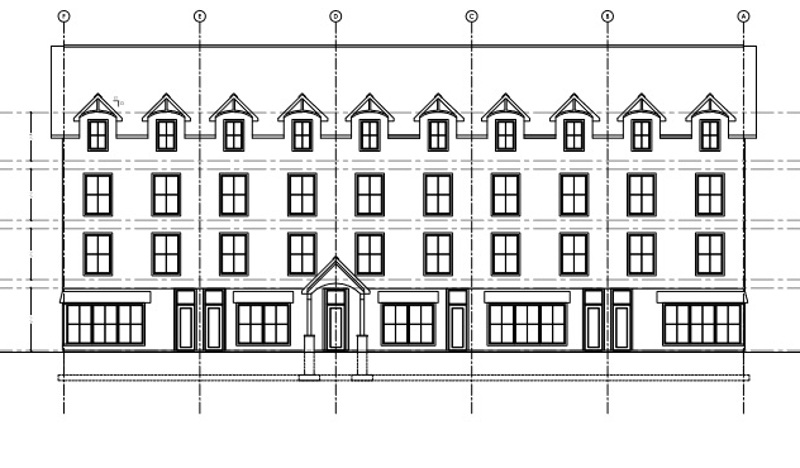 A mixed use development proposal for a string of properties on Collingwood Street will be the focus of a public planning meeting to be held at Meaford Hall on Monday, July 18, at 5 p.m.

Proponent Sarlie Canada Inc. is seeking a zoning bylaw amendment in order for the proposed development to proceed. Rob Voight, Meaford’s Director of Development Services has recused himself during previous discussion about this proposal, and will continue to do so as his spouse, Krista Voigt, is part of the development team for Sarlie Canada Inc.

“MHBC was retained in June, 2022 by Sarlie Canada Inc. (the “Owner”) to prepare a Scoped Heritage Impact Assessment (HIA) for the subject lands located at 12, 22, 24, 28 and 34 Collingwood Street East and on Part Lot 1091 of Registered Plan 309 in the municipality of Meaford. The subject lands are located within the Downtown Meaford Heritage Conservation District (HCD) and adjacent (opposite) to the designated property of 12 Nelson Street, Meaford (Meaford Hall),” noted a summary report prepared by municipal staff, and available on the municipal website. “The lands are currently vacant and the owner is proposing to redevelop the lands to include a four storey multiple unit residential building and 12 townhouse units in two buildings.”

In early June, the proposal was before Meaford’s Heritage Advisory Committe as part of the municipal heritage permit process.

“The proposed development conforms to the heritage policies of the Official Plan and Downtown Meaford HCD Plan and Guidelines. Foremost, the proposal provides an appropriate scale of infill development that respects the character of the area,” noted the staff summary report.

Councillor Ross Kentner shared his thoughts on the proposal on social media on June 8.

“Meaford could have a unique value proposition for young entrepreneurs if a project presented to the Heritage Advisory Committee today comes to fruition. Krista Voigt, speaking for Sarlie Canada, a Meaford-based company, said it’s hard enough for a young couple to afford a home let alone pay rent for a store. The project, proposed for Collingwood St. opposite the market square, would have ten 1-bedroom condos with a ground floor 200-square foot store front and ten 2-bedroom condos with a 200-square foot store front and a loft that could serve as an office,” noted Kentner. “For nearly twenty years a number of derelict houses occupied the space east of the old Capitol Theatre. They were cleared during this term of council and the Heritage Advisory Committee was presented with a proposal for one large 5-storey condo building. But the property has since changed hands.”

Anyone wishing to learn more or to offer their thoughts on the proposal can attend the public planning meeting on July 18. If a person or public body does not make oral submissions at a public meeting or make written submissions to the Municipality of Meaford before the by-law is passed, the person or public body is not entitled to appeal the decision of Council to the Ontario Land Tribunal.

Documents related to the development proposal can be found online at https://www.meaford.ca/en/business-development/collingwood-street-mixed-use-development.aspx