On My Bookshelf: The Personal Librarian by Marie Benedict and Victoria Christopher Murray 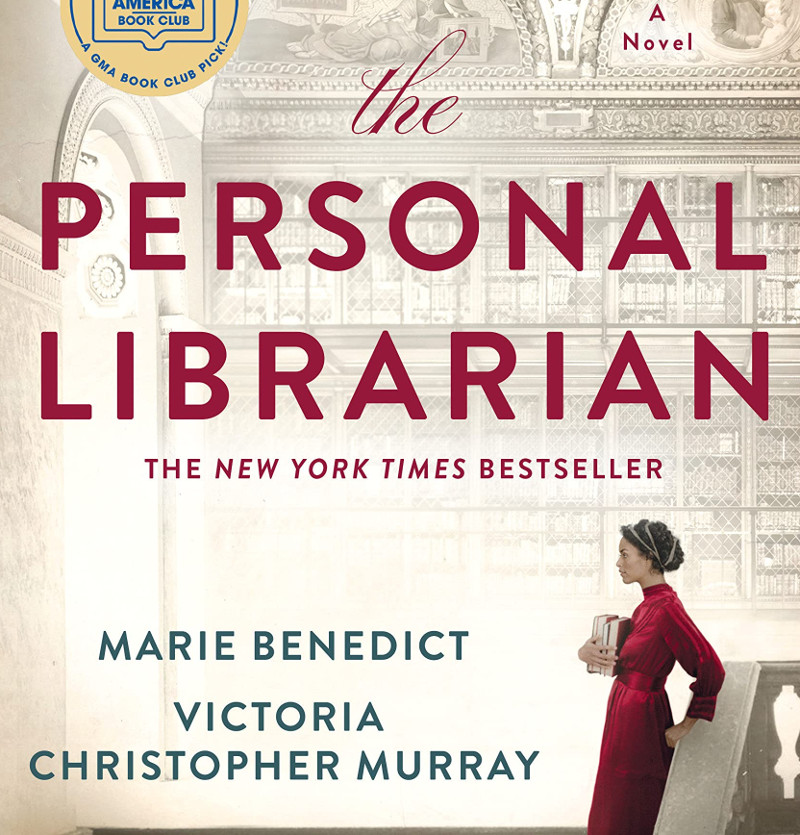 Have you ever considered assuming a new identity? Perhaps thought, “I’d be more successful if I were a different ethnicity. If my accent were more socially acceptable. If my skin were a different colour.” This is the premise behind the dramatic story in The Personal Librarian. Adding to the intrigue of this novel is that it is based on a true story and a real woman.

Belle Marion Greener was born to accomplished and notable Black parents. Her father was an attorney and racial justice advocate, the first Black graduate of Harvard. Her mother was from a prominent Black family in Washington, DC. It was her mother’s decision, after separating from her husband, that she and her children would pass as white and begin a new life. All were light-skinned enough to pass, even if it meant creating a Portuguese ancestry to explain a slightly dark complexion. Belle Greener became Belle DeCosta Greene. Trained as a librarian at the Princeton University library, Greene grew a reputation for her skills in cataloguing reference books and her knowledge of rare books. In 1905, this brought her to the attention of financier J. Pierpont Morgan. A great collector of rare bibles and manuscripts, Morgan was about to open his own library, which he saw as his personal legacy.

The story follows Belle’s journey through the dizzying world of rare books and New York high society. She is under incredible scrutiny, as a woman working in a man’s world, challenging and outsmarting very well established and powerful men to achieve her goals. She is constantly aware of her racial secret and lives in dread of being discovered. There were points in the book where I tired of her inner dialogue, her questioning, her fear that she would be discovered and consequently ruined. This is however, a key element of her journey and the reader needs to be reminded of the constant threat she lived under.

Any fans of the HBO show The Gilded Age will find many of the same characters and events described in the TV show. Greene was very well paid by Morgan, and became a well-dressed, and well-respected member of that elite society.

The book is written in the first person, which gives the reader access to Belle’s inner thoughts, her struggles, her romances, and often her insecurities. The book is rich with detailed descriptions of the manuscripts being considered for acquisition for this library. Clearly a great deal of research went into this book to flesh out the importance of the collection, now open to the public as the Morgan Library and Museum.

I had mixed thoughts on this book while reading it. I was quite engaged in the story, especially since I was able to google images of the Morgan Library as well as the different people. It was thrilling to imagine Greene in the finest European auction houses, negotiating clandestine deals and achieving the goals set for her by J.P. Morgan. On the other hand, the story was often weighed down by the detailed descriptions of the manuscripts, bibles, and works of art. I suddenly felt I was at a university lecture I hadn’t signed up for! These slowed the pace of the book to a crawl and took away from my overall enjoyment.

I would still recommend this book, despite its flaws. It gave me a lot to think about. The challenge of hiding one’s true identity. The challenge a woman faced in the early 20th century. The absurdity of millions spent on J.P. Morgan’s monument of a library and its contents. The library still functions today, in all its golden and gilded splendour, as a museum and research facility. Belle DeCosta Greene is prominently featured on their website. She is hailed for her groundbreaking work. I have to wonder what she would think, however, about having her true racial identity shared with the world.

This book is available at the Thornbury Library, where Meaford residents also have borrowing privileges.