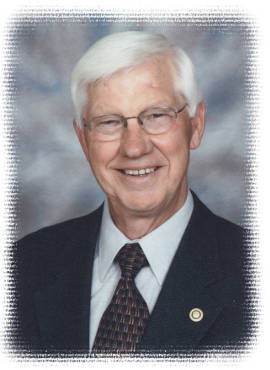 Ray Young passed away suddenly at Grey Bruce Health Services in Meaford on Sunday, March 21, 2021, at the age of 85.

Ray was the much loved husband of Doreen (nee Dobson) Young of Meaford. He was the loving father of Rick Young and his wife Cathy of Ottawa. Ray was the proud Grandpa of Ryan Young of Toronto.

He will be missed dearly by his brothers Ivan Young (late Ila), Clarence Young (Marjorie), Carl Young (Mary), Stan Young, his sister-in-law Linda Young, and will be remembered fondly by his many nieces, nephews, and their families.

Inspector Ray Young retired after more than 33 years with a distinguished career with the Peel Regional Police Department. In 1992 Ray and Doreen moved to Meaford, where he was honoured to join the Rotary Club and thoroughly enjoyed participating in the community. Some of the things he enjoyed most were curling, golfing, and dancing. Ray took great pride in caring for his home and gardens. He will be remembered as a reserved gentleman. In later years Ray remarked that he had a good life and wouldn’t have changed anything.

A private family service will be conducted at Maxwell Cemetery at a later date.

As your expression of sympathy, donations to the Meaford Hospital Foundation or the Heart and Stroke Foundation would be appreciated and may be made through the Ferguson Funeral Home, 48 Boucher St. E., Meaford, ON, N4L 1B9, to whom arrangements have been entrusted. www.fergusonfuneralhomes.ca